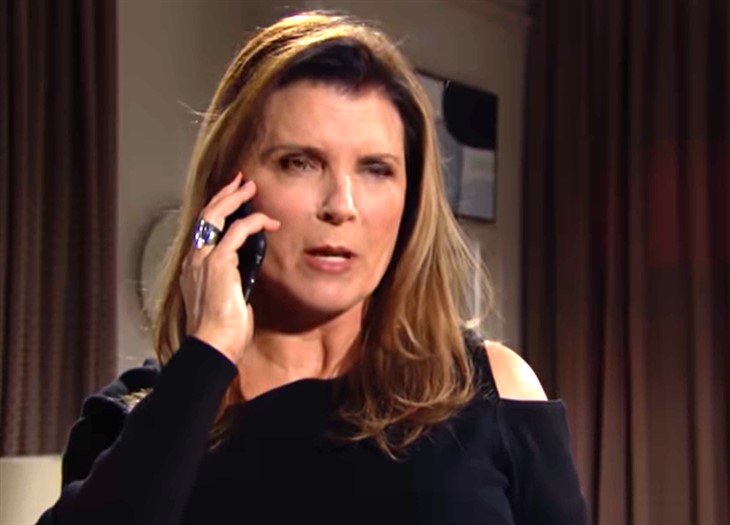 The Bold and the Beautiful spoilers for the week of May 2 reveal that Steffy Forrester Finnegan (Jacqueline MacInnes Wood) goes home. As Steffy is trying to cope with being a widow, Sheila Carter (Kimberlin Brown) makes a surprise visit. Sheila claims to be there for noble reasons. However, Steffy gets a sickening feeling in her stomach.

The Bold And The Beautiful Spoilers – Steffy Forrester Finnegan Released

B&B spoilers for the week of May 2 confirm that Steffy is finally released from the hospital. Steffy barely escaped the shooting with her life. Although Steffy was comatose for a while, she did wake up. Then, the whole drama with Steffy’s partial amnesia and forgetting John “Finn” Finnegan (formerly played by Tanner Novlan) caught everyone off guard.

Once Steffy remembered Finn and Hayes Forrester Finnegan (Piper Harriot), Sheila tried to kill her again. It failed as there was an unexpected interruption as Sheila put her sinister plan in motion.

When Steffy comes home, she will be happy to be reunited with Hayes and Kelly Spencer (Sophia Paras McKinlay). Steffy was able to get visits from her children in the hospital but it’s different from being home with them. Once Steffy goes home, though, there will be a lot of reminds of Finn. Steffy will have to cope with living life without her husband by her side.

The Bold And The Beautiful Spoilers – Sheila Carter’s Unexpected Visit

The Bold and the Beautiful spoilers reveal that after Steffy is released from the hospital, Sheila will stop by. Of course, Steffy isn’t expecting Sheila to come over. Sheila will likely have a noble reason for showing up without permission.

Even though Steffy did sympathize with Sheila in the hospital, which was just a brief moment of kindness. It did not mean that Steffy trusted Sheila or wanted her around. Steffy probably still feels the same way about protecting her kids from Sheila.

It is teased that during the week of May 2, Steffy will have a bad feeling about Sheila’s visit. Plus, Steffy is still recovering from her injuries. This means she might not have the physical strength to fight Sheila off if she attacks. At the same time, Steffy needs to be careful how she deals with Sheila. Steffy will need to alert someone of Sheila’s presence, but can anyone get there before it’s too late?

What do you think Sheila is going to do when she stops by Steffy’s house next week? Is Sheila’s intention to murder Steffy, or is she there to take Hayes? Share your thoughts and remember to keep watching the CBS soap to see what happens next.