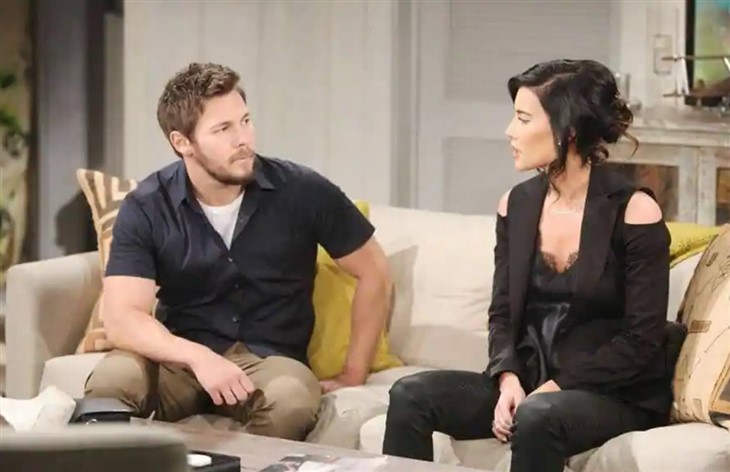 The Bold and the Beautiful (B&B) spoilers reveal that Steffy Forrester Finnegan (Jacqueline MacInnes) will continue leaning on Liam Spencer (Scott Clifton). However, “Steam” might not be the next love story in the CBS soap. After Steffy grieves for John “Finn” Finnegan (Tanner Novlan), could she find love with Bill Spencer (Don Diamont)?

The Bold And The Beautiful Spoilers – Mourning John ‘Finn’ Finnegan

B&B spoilers reveal that Steffy realizes that Liam isn’t her husband anymore. Steffy was so traumatized by the shooting that her mind completely blocked out John “Finn” Finnegan’s (Tanner Novlan) memory. However, that also meant blocking out the memory of her own son, Hayes Forrester Finnegan (Piper Harriot).

Steffy finally knows the truth and is mourning the loss of Finn. Hope Logan Spencer (Annika Noelle) and Brooke Logan Forrester (Katherine Kelly Lang) thought this would put an end to “Steam” reconnecting.

Despite Steffy reminding Liam that he needs to focus on Hope, he insists on being there for her. Hope has been listening to portions of Liam and Steffy’s conversations in the hospital. During the week of May 2, Steffy will go home from the hospital. Liam will be the one that takes Steffy home instead of her own family, though.

Liam won’t just get Steffy settled back at home. Liam will stick around to be there for Steffy. “Steam” will talk and bond with their daughter, Kelly Spencer (Sophia Paras McKinlay).

The Bold And The Beautiful Spoilers – Logan Women Panic Over ‘Steam’

The Bold and the Beautiful spoilers reveal that Hope is panicking inside about Liam being the one that Steffy leans on. However, she’s trying not to admit this to anyone, including herself.

During the week of May 2, Brooke will continue expressing her concerns about Liam being with Steffy after the hospital release. Hope tries to justify Liam’s actions. Even though Hope is rationalizing the situation to others, she does become increasingly worried about her marriage.

Even though it looks like Liam and Steffy will get back together, that might not be what happens. Steffy made it clear to Liam that he’s married to Hope. Plus, it is teased that Steffy will get the support of not just Liam but Bill.

There is reason to believe that Steffy’s next romance won’t be Liam at all. Fans could just see a “Still” reboot, especially when Bill’s investigators find out the truth about the shooting. Fans have gone through enough of Liam waffling between Hope and Steffy. Right now, Bill is single and ready to mingle. So, that would be better than doing the same old love triangle.