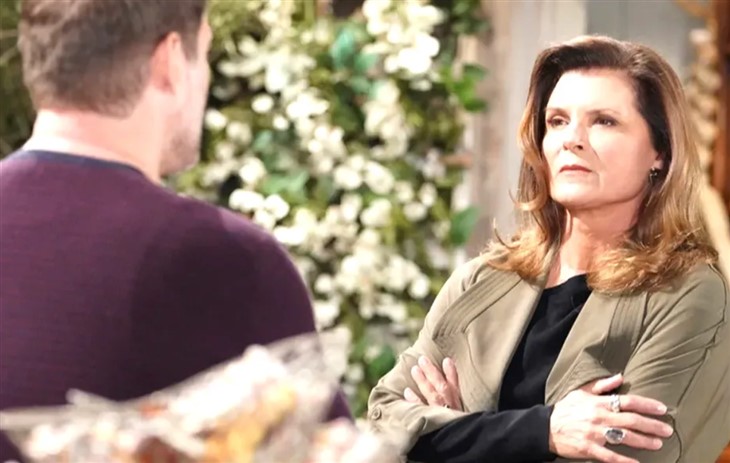 The Bold and the Beautiful spoilers reveal that John “Finn” Finnegan (Tanner Novlan) gets rescued. As Finn reunites with Steffy Forrester Finnegan (Jacqueline MacInnes Wood), Sheila Carter (Kimberlin Brown) will still be on the loose. Sheila approaches Deacon Sharpe (Sean Kanan) wearing a disguise and forces her way inside with a crazy demand.

The Bold And The Beautiful Spoilers – John Finnegan Rescued

This will lead to Finn finally getting rescued. However, don’t expect Sheila to give herself up and go back to prison. Sheila will find a way to escape and makes her next move.

Sheila probably already had a plan in place ever since Mike Guthrie (Ken Hanes) warned her about being interrogated. Sheila was furious that Mike went straight to her.

Sheila knows that the police are probably tailing Mike. Sheila doesn’t like being cornered or blindsided. Even though Mike claims he wasn’t followed, Sheila knows he is being watched and just doesn’t realize it. So, when Bill shows up, expect Sheila to already have an escape plan.

The Bold And The Beautiful Spoilers – Deacon Sharpe’s Blindsided

The Bold and the Beautiful spoilers reveal that Soap Opera Digest published a photo showing Sheila’s next move. The scene was originally scheduled to air this week. However, due to preemptions, it will now air during the week of August 1.

Sheila is wearing a black wig and is forcing her way through Deacon’s door. Deacon is seen struggling to keep Sheila out. However, it is teased that Sheila makes her way inside and has a crazy story along with an insane request.

Sheila was already unstable before but is clearly becoming even more unhinged. It is teased that Deacon will become an unwilling participant in Sheila’s new plan.

The only way that Deacon would agree to help Sheila is if someone he loved were at risk. So, it is speculated that Sheila could threaten Hope Logan Spencer (Annika Noelle), Brooke Logan Forrester (Katherine Kelly Lang) or even Taylor Hayes (Krista Allen).