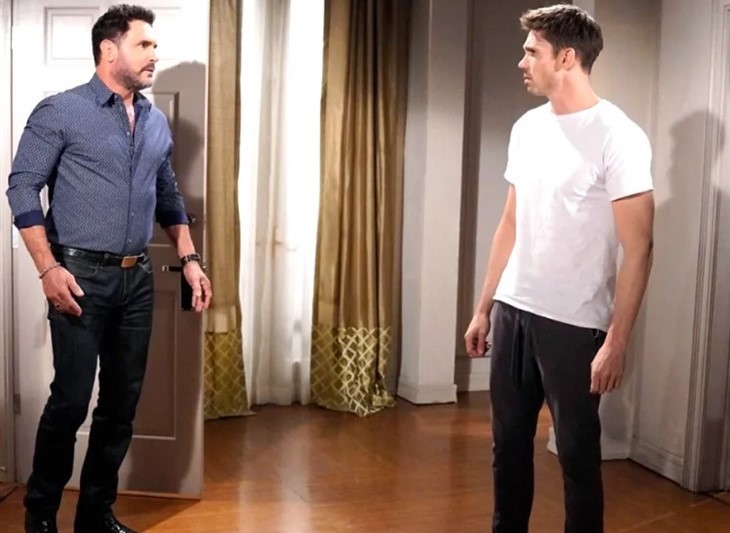 The Bold and the Beautiful spoilers document that John Finn Finnegan (Tanner Novlan) was not thinking straight after all he was put through by the woman who claims to be his real mother. Bill Spencer (Don Diamont) was not thinking clearly and had no reason to enable the mistake both men made.

Bill and Finn could not wait for a handful of minutes to ensure that one of the greatest scoundrels of all-time was safely transferred to the authorities, even knowing that she managed to escape from prison weeks ago.

Mike Guthrie (Ken Hanes) was not done with Sheila. Instead, he returned to where she was holding Finn prisoner despite being aware that the police considered him the number one suspect in Sheila’s escape.

Hanes’ character could not have predicted that drama was playing out between Sheila, Finn, Bill, and Li. So, why was he back?

Viewers were asked to make an extreme stretch, past the point of believability for some. Mike arrives at the exact right time, again, knocks Li out, cuts Sheila free, is passionately kissed, watches her run off, and then, moments later, is arrested by the arriving police? Come on.

B&B Spoilers – But The Plot Needed To Be Pushed

However, fans who will accept the seemingly indigestible do accept something worthwhile. This plot was pushed to the next needed chapter through Mike being written into the scene after Bill and Finn foolishly departed.

So, Bill and Finn are off to Monaco, where a grand reunion with Steffy will happen. TPTB likely calculate fans will be satisfied with that result because the emotions stirred in the anticipated reunion will be wonderfully satisfying.

Hey, it is great to have Finn be the one to tell Steffy that he is alive. Getting from that bed to her overseas location was a leap of soapy faith. But so be it. This is escapist entertainment, not the solution to a mathematical problem, and regardless of whatever logical counters can be offered.

The Bold And The Beautiful Spoilers – Sheila Carter Flees Justice?

Sheila is on the run. This fugitive does not grasp justice, thinking it is only applicable to those she feels wronged her, like Steffy.

Those who are devoted to this genre believe Brown’s work across the years has been important. She did not win her first Daytime Emmy, in an unfathomable second-only nomination, in June 2022.

But Brown clearly deserves another nomination within this Emmy period, with the 2023 award season representing her best chance to earn the statue. This great actor deserves full consideration. In the meantime, Sheila retains her immortal daytime status.