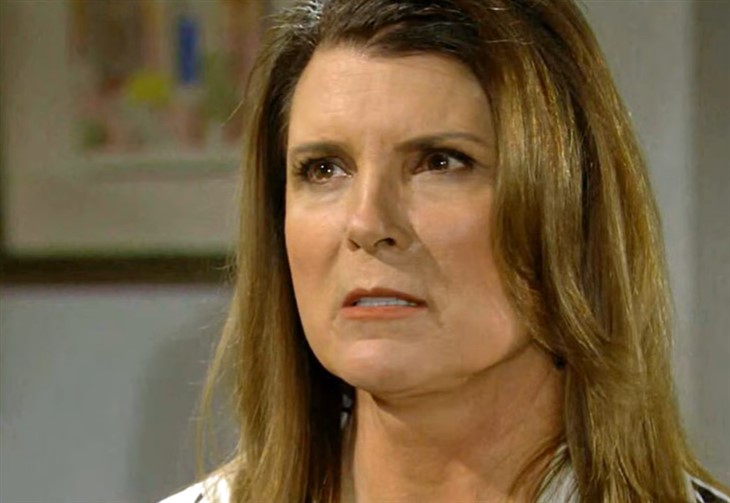 The Bold and the Beautiful (B&B) spoilers reveal that Sheila Carter (Kimberlin Brown) is still hoping she can get closer to her son and grandchild. However, she keeps doing the opposite of what she should be doing. During the week of March 21, John “Finn” Finnegan (Tanner Novlan) makes Sheila an offer. However, it raises the stakes considering Sheila’s current scheme.

The Bold And The Beautiful Spoilers – Sheila Carter’s Wish

B&B spoilers reveal that when Sheila approached Finn at his wedding and identified herself as his birth mother, there was a lot of drama. Finn was educated on the type of woman that Sheila was and warned not to get close to Sheila. Despite the villain’s past, she kept insisting that she is different now.

While Sheila seemed to be trying to be a better person, she quickly reverted back to her old ways. Sheila seems to be doing the exact opposite of what she should be doing to get to her goal: being part of Finn and Hayes Forrester Finnegan’s (Piper Harriot) lives.

Sheila managed to get invited to Finn and Steffy Forrester Finnegan’s (Jacqueline MacInnes Wood) house for Christmas Eve. While that seemed to go well enough, Sheila hasn’t been asked back. Of course, Steffy only did it because Taylor Hayes (Krista Allen) wanted to observe Sheila.

During the week of March 21, Finn will take steps to reconnect with his mother. Finn will extend an olive branch. It is stated that Finn makes an offer to Sheila that will give her the opportunity of redemption.

The Bold And The Beautiful Spoilers  – Getting Closer to Family

The Bold and the Beautiful spoilers reveal that Finn knows how strongly Steffy feels about Sheila staying away from their family. So, Finn won’t be opening the door wide open, but will just provide a tiny opening. Finn probably wants to see if Sheila really has changed but will still be cautious.

Of course, this will get Sheila very excited. Sheila will think she’s finally getting what she’s always wanted. However, it will get complicated due to certain people finding out about Sheila’s scheme.

However, Thomas’ conversation with Sheila will be partially overheard by Carter Walton (Lawrence Saint-Victor) and Ridge Forrester (Thorsten Kaye). Then, Steffy sees Thomas and Sheila having a heated conversation but can’t hear what they are talking about. When the truth comes out about Sheila’s actions, Finn might never forgive her.

GH Spoilers: Carly Has Diane Draw Up A Restraining Order On Joss’s Behalf Against Esme?