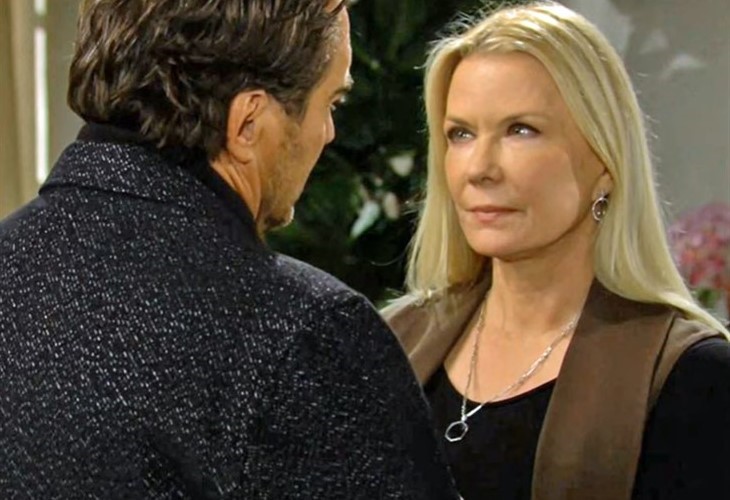 The Bold and the Beautiful spoilers reveal that Brooke Logan Forrester (Katherine Kelly Lang) agreed to let Ridge Forrester (Thorsten Kaye) go. However, she will change her mind during the week of March 14. Brooke “comes to her senses” and realizes she needs to fight for her marriage. However, that might be easier said than done.

The Bold And The Beautiful Spoilers – Brooke Logan Forrester’s Decision

Taylor expected Ridge to have mixed feelings about it and he does. At the same time, Ridge pulled Taylor into a passionate kiss. While Brooke’s shocking decision might make Taylor think it’s safe to open her heart fully to Ridge, there is another bombshell ahead.

During the week of March 14, Brooke will realize that she can’t let Ridge go. This revelation probably comes right after Brooke has her special episode which focuses on Brooke’s many loves over the years. Once Brooke realizes that she wants to fight for her marriage, she will bring it up to Ridge.

However, by the time that happens, Ridge and Taylor could officially be back together. In fact, it sounds as if Ridge either says no or remains divided. It is stated that Brooke will beg Ridge for another chance.

The Bold And The Beautiful Spoilers – Love Triangle Not Over

The Bold and the Beautiful spoilers reveal that love triangle storylines usually last for at least a few months… many times much longer. So, for the love triangle to be resolved this quickly is unlikely.

The Bold and the Beautiful Spoilers: It Gets Messy

Even if Ridge and Brooke get back together in the next few weeks, that won’t be the end of the story. For one, Steffy Forrester Finnegan (Jacqueline MacInnes Wood) seems obsessed with “Tridge” getting back together. So, she probably won’t accept a “Bridge” reunion or will somehow interfere.

There is also the chance that Taylor won’t want to let go. There are some fans who believe Ridge could find himself playing ping-pong with both womens’ hearts. At some point, Ridge will make a final decision, but it won’t be within the next few weeks, that’s for sure.

What are your thoughts on Brooke changing her mind about her marriage once again? Will it be too late or could Ridge find himself torn? At the end, which woman will Ridge end up with? Share your theory and keep watching the CBS soap to see what happens next.