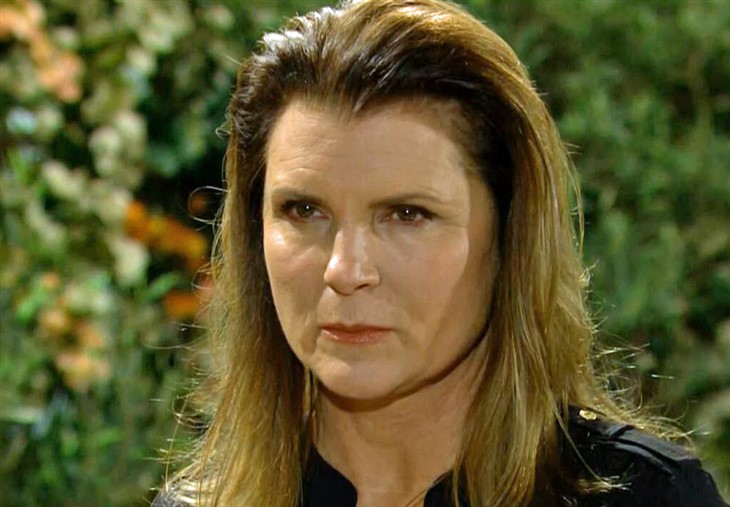 The Bold And The Beautiful Spoilers – Sheila Carter In Charge?

Escaped convict Sheila Carter chose to seek harbor at Hope’s dad’s broom closet. Thus, Sheila asked Deacon Sharpe (Sean Kanan) to hide her out and he said yes, redirecting the police away from his place.

To be fair, he was swayed by her version of John Finnegan’s (Tanner Novlan) miraculous return from the dead. In her story, she was the one who saved him when actually it was his adoptive mother, Li Finnegan (Namomi Matsuda), not Sheila the egg donor.

A deceived Deacon, who should know better, tells Lt. Baker (Dan Martin) that he has no idea where crazy Sheila and sends him away. But this deception will get out and it will affect his relationship with his daughter Hope.

Deacon tells Sheila to be gone when he gets back, but explosive show spoilers tease that Hope will eventually finds out how he hid the con artist who has caused her fam so much trouble. And when that happens she will go ballistic on Deacon.

How will she find out? Could it be that a guilt stricken Deacon tells Hope himself? He knows his relationship with Hope depends on the truth, and his conscience will start to bug him.

However it is that Hope finds out, she will be destroyed by what Deacon did to shelter a criminal. She has defended his honor, and when he got out of jail she welcomed him back, telling everyone that he’d changed.

Look for Hope and Deacon to be talking about Sheila when he starts to act funny. Will Hope notice? He has sworn to her that he will never again lie to her. But spoilers indicate that Deacon makes a big mistake and it could lead to Sheila harming Hope.

At the very least Hope will be devastated by the bad decision that Deacon made to help Sheila. Will she corner both ex-cons together in the little shack he calls home? If so Hope will want to call the police. But she will have a conflict, this means her dad could go back to jail as well. There will be more twists and turns to this plot, stay tuned B&B fans!