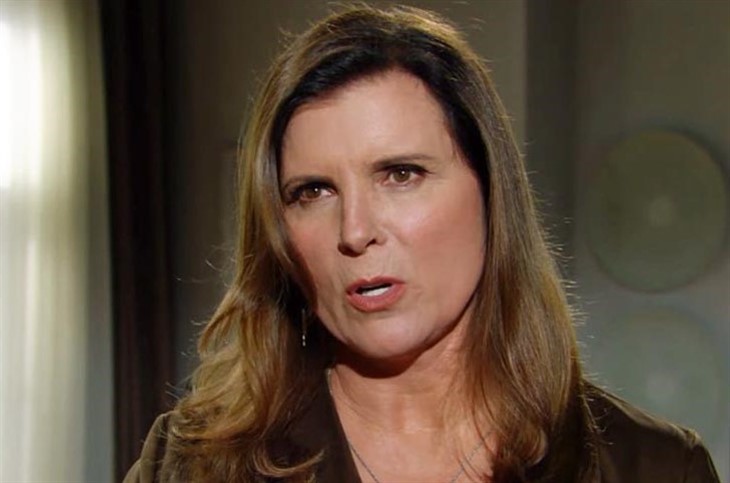 The Bold and the Beautiful (B&B) spoilers document that Sheila Carter’s (Kimberlin Brown) plan to get Brooke Logan Forrester (Katherine Kelly Lang) worked better than she expected. Sheila’s message to Thomas Forrester (Matthew Atkinson) was to take her secret to his grave.

That raises an interesting question. Will Sheila put Thomas in his grave if he does not agree?

The Bold And The Beautiful Spoilers – Not Pushing The Plot Along

Thomas was not outraged by Quinn Fuller’s (Rena Sofer) spiking of Brooke’s drink in the recent past. As devoted viewers recall, Brooke’s drink was an open bottle of juice.

Quinn, who felt Brooke was undermining her marriage to Eric Forrester (John McCook), decided to pour alcohol into Brooke’s bottle. Lang’s character did not see that happen, drank from it, and became slightly inebriated.

Thomas was later told what happened by Brooke. But he did not react with anywhere near the level of venom as he did now when Sheila foolishly opened this can of soapy worms.

Atkinson’s character has never let that fact be known. So, what is different now?

The Thomas viewers observed in the recent past is not the same man today. His transformation began while he was recovering from his brain injury.

Douglas Forrester (Henry Samiri) was used by Thomas on multiple occasions during the period when Atkinson’s character was unhinged. Thomas’ realization forced him to change, which also allowed for healthy interaction with Hope Spencer (Annika Noelle) and includes an honest truce with Liam Spencer (Scott Clifton).

So, Thomas’ formerly me-first perspective has been replaced by a more balanced outlook on life in all regards. That is why he is outraged that Sheila purposely broke Brooke’s sobriety. Of course, he did not mention that period is far shorter than most people believe, with the Quinn spike being the last time Brooke drank.

Sheila would once again be public enemy number one if everyone learns what happened. She would also be furious that her so-called gift to the Forrester’s was slapped down by Thomas.

One consequence in this outcome would likely include John Finn Finnegan’s (Tanner Novlan) reaction. His response could be to block Sheila from seeing him or Hayes Forrester Finnegan (Samantha Worden and Piper Harriet). That alone would set Sheila off, with Thomas becoming her natural target.