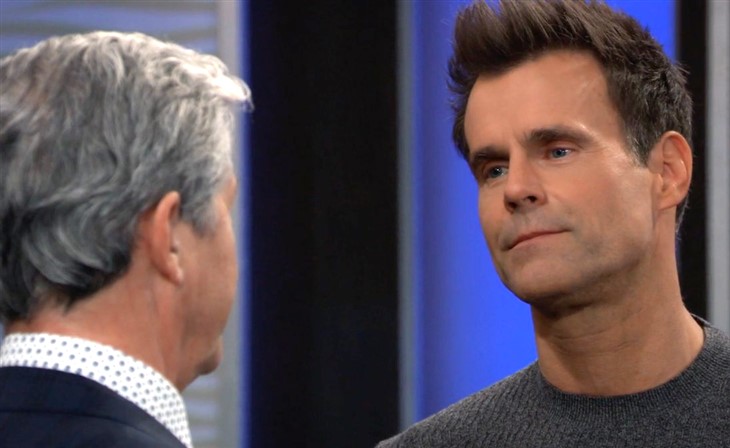 General Hospital (GH) spoilers and updates tease that Victor Cassadine (Charles Shaughnessy) will blackmail Drew Cain (Cameron Mathison) into meeting with him in an upcoming episode of General Hospital!

General Hospital viewers will recall that Victor was tricked into thinking he has the right tarot card to reactivate Drew Cain’s conditioning in a recent episode of General Hospital. Dante Falconeri (Dominic Zamprogna) had attempted to get Peter August’s (Wes Ramsey) final effects from the Port Charles Police Department where they had been in evidence.

But they had already been sent and delivered to a person who Peter had chosen as his executor, his half-sister Britt Westbourne (Kelly Thiebaud), and Britt is contacted, who is with Maxie Jones (Kirsten Storms) and baby Bailey Louise Jones (Jett and London Prinzo-Berendt) at the Metro Court. As Drew stopped Victor inside the Metro Court, distracting him, Dante and Sam were able to slip a fake tarot card into Peter’s box, and Maxie and Britt fought over the box! It fell, and out tumbled everything including the fake tarot card, which Victor slipped in his sleeve!

General Hospital viewers will recall that Victor thinks that Drew has buried memories of something that he wants and needs – but he is likely mistaken. General Hospital viewers will recall that when Dr. Andre Maddox (Anthony Montgomery) put all of Drew’s memories on a flash drive, which was later downloaded into Franco Baldwin (Roger Howarth) he said there was nothing left. This is why Victor wants to be able to reactivate Drew, is to be able to get into his brain and try to get at what he thinks Drew remembers; there is a slight chance that Drew’s memories could be layered.

This is what Andre found when he removed Drew’s memories from Franco, Franco’s memories were layered underneath Drew’s; but Drew had a brain injury and suffered amnesia when he first showed up in Port Charles as “Jake Doe”. This is a complication that may not be able to be overcome, because this was the same thing that prevented Jason Morgan (Steve Burton) from receiving Drew’s memories!

General Hospital viewers will see Victor use threats to Drew’s family to blackmail him into meeting with him; he’ll tell him he will if he values his family! But this is something that Drew is not surprised by – and he lets Victor think he’s bullied him into meeting. What Victor doesn’t know is that the card he swiped is not the right card, and that he was tricked; so Drew just plays along with him and meets with him, knowing he cannot use the card to reactivate with him. General Hospital viewers will see Drew continue to play along with Victor – within reason – until he can find out what Victor’s assignment for him is, if he indeed has one. That way he can report back with intel on what Victor’s likely plans are!

Royal Family News: Who Is The Hired Hand That Rocked The Cradle Of Prince George?