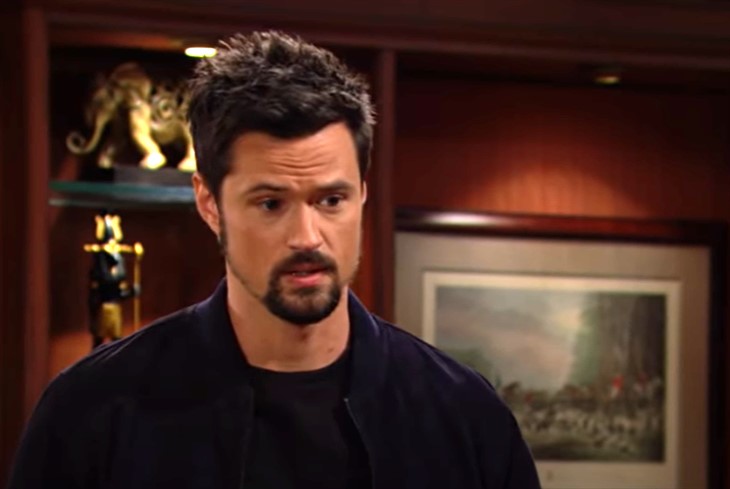 The Bold and the Beautiful (B&B) spoilers document that Sheila Carter (Kimberlin Brown) makes life hard even when she does not intend to. Thomas Forrester (Matthew Atkinson) had no idea that the woman who shot his mother engineered the scenario that resulted in his father breaking from Brooke Logan Forrester (Katherine Kelly Lang).

Sheila’s impulse leads Thomas to the truth about New Year’s Eve creates an opportunity. Ridge Forrester (Thorsten Kaye) does not know the real reason why Brooke felt compelled to drink, which led to her mystifying holiday encounter with Deacon Sharpe (Sean Kanan).

Ridge’s plan to leave Brooke and likely reconcile with Taylor Hayes (Krista Allen) could be sidelined or ended if Thomas chooses to enlighten his father. But will Atkinson’s character choose to do so?

The Bold And The Beautiful (B&B) Spoilers: Sheila Gives Thomas An Earful

The Bold And The Beautiful Spoilers – A Reason To Remain Silent

Keeping quiet means that Brooke stays trapped. She appears to have created another self-inflicted downfall.

Ridge can not stand that Brooke betrayed his trust with the man he considers fused to her greatest scandal. Of course, many B&B characters, past and present, and a likely sizable percentage of longtime viewers agree with Ridge’s assessment.

So, if Thomas tells no one, even secondary people, like Steffy Forrester Finnegan (Jacqueline MacInnes Wood), the likelihood of Ridge staying at the cliff house and finding his way fully back to Taylor is good.

B&B Spoilers – A Reason To Relay The Truth

Ridge values honesty. That is why he is so disappointed in Brooke. Thomas risks damaging the relationship he worked to restore with his father if he does not relay to Ridge all that Sheila implied.

Brooke is not Thomas’ favorite person. But he also was noticeably bothered by Sheila’s gleeful appreciation of Brooke’s downfall.

It did not make sense since Brown’s character was not known to be connected to what happened. Yet Thomas firmly believes she was.

The Bold And The Beautiful Spoilers – When Does Ridge Forrester Find Out?

Timing is key in the soap world. Eavesdropping often advances a character’s knowledge. But in this instance, Sheila’s arrogance and unforced error have armed Thomas with a powerful weapon.

Brooke’s mind will be put at ease if Thomas tells her what Sheila said. The mystery of Brooke’s impulse to drink will be solved. Her resulting actions will be seen in a different light as well.

However, Sheila’s dastardly revenge scheme will not erase Brooke’s choice to keep the truth from Ridge for many weeks. So, no matter when Ridge learns what happened, he will still need to synthesize all the facts on B&B.

Days Of Our Lives Spoilers: Getting The Goods On Leo Stark

GH Spoilers: Nina Is devastated That Wiley Isn’t Her Grandson!