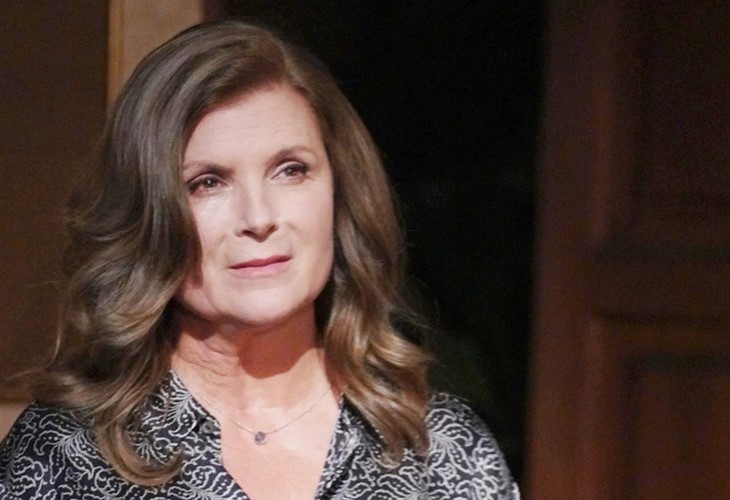 The Bold and the Beautiful (B&B) spoilers for the week of February 14 reveal Sheila Carter (Kimberlin Brown) gloats. Sheila makes it clear that she already knows about Brooke Logan Forrester’s (Katherine Kelly Lang) relapse and betrayal. Taylor is stunned but has a decision to make. Does she reveal this information or keep quiet so she can get Ridge Forrester (Thorsten Kaye) back?

The Bold And The Beautiful Spoilers – Brooke Logan Forrester Exposed

B&B spoilers reveal that Steffy Forrester Finnegan (Jacqueline MacInnes Wood) got the proof she needed to find out what Brooke was hiding. Steffy told Taylor, who will turn around and inform Ridge.

Brooke is confronted by Ridge during the week of February 7, who assumes his wife is having an affair with Deacon Sharpe (Sean Kanan). Brooke is also confronted by Steffy and Taylor on two separate occasions.

Ridge will end up confronting Deacon and punching him in the face. The attack sends Deacon flying to the floor. By the end of the week, Deacon will finally give Sheila what she wants. Deacon tells Sheila everything that happened between him and Brooke on New Year’s Eve.

The Bold And The Beautiful Spoilers – Sheila Carter Gloats

The Bold and the Beautiful spoilers reveal that during the week of February 14, Sheila and Taylor have another interaction. Taylor is stunned by what she learns from Sheila. The villain makes it clear that she already knows about Brooke’s relapse and betrayal. Sheila also indicates that she knows about Ridge and Brooke’s crumbling marriage. Sheila can’t help but get giddy while she gloats.

Even if Sheila gloats about knowing about Brooke, she might not admit to doing anything to cause it. Despite that, Taylor will likely suspect Sheila is somehow involved. After all, how else would Sheila know this quickly about everything that is going on with Ridge, Brooke, and Deacon?

However, by this time, Ridge and Taylor will have gotten much closer. Even though Taylor tries to do the right thing most of the time, her heart might get in the way of that. Will Taylor tell Ridge about Sheila being involved in Brooke’s relapse, which is the only reason she kissed Deacon? Or could Taylor keep quiet and take back the man she loves?

What do you think Taylor is going to do when Sheila gloats about Brooke’s downfall? Will Taylor end up telling Ridge the truth about Sheila being involved in Brooke’s downfall? Or will she stay silent in order to get Ridge back into her bed? Share your thoughts and remember to keep watching the CBS soap to see what happens next.