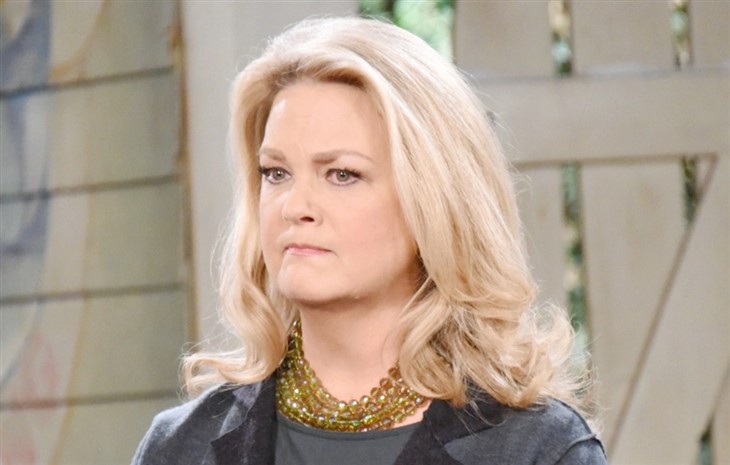 Days of Our Lives spoilers reveal that Kristen DiMera (Stacy Haiduk) knows people will be looking for Abigail DiMera (Marci Miller). To stop that, she could send Ava Vitali (Tamara Braun) another mask. When Gwen Rizczech (Emily O’Brien) refuses to get involved, Ava could impersonate Abigail herself. However, Anna DiMera (Leann Hunley) is too smart for that.

DOOL spoilers reveal that Abigail disappeared after ripping off Ava’s “Sarah Horton” (Linsey Godfrey) mask. Even though nobody knows that Sarah was being impersonated by Ava, Abigail did share her theory with Chad DiMera (Billy Flynn). Abigail was on the right track, but partially wrong on the people responsible.

Chad and Xander Cook (Paul Telfer) have already noticed that Abigail has disappeared. Chad and Kate Roberts (Lauren Koslow) will work together to track down Abigail. However, it is Tony DiMera (Thaao Penghlis) that goes with Chad to the deserted island.

Kristen knows that people will be looking for Abigail. Since Ava and Gwen worked so well on impersonating Sarah, Kristen will probably send them another mask. Ava will probably order Gwen to wear it and pretend she’s Abigail. However, Gwen is showing signs of guilt and probably will refuse.

Days of Our Lives spoilers reveal that if this happens, Ava will huff and puff. However, Ava will probably end up impersonating Abigail herself. When the fake Abigail gets to the DiMera mansion, Ava could discover that Chad and Tony are already headed to the island. This creates a big problem for Kristen, Ava, and Gwen.

Even though Tony and Chad might be gone, Anna will probably still be around. So, Ava might think she can easily fool Anna. The fake Abigail might come up with some story about not being in love with Chad anymore, not being able to get over the affair, or that she’s returning to the psychiatric hospital.

However, Anna is not a stupid woman. Anna might seem ditzy at times, but her instincts are usually dead-on. It would also be like Anna to play the player. It is suggested that Ava will end up going crazy. She’s well on her way there, especially with the giant killer teddy bear dreams she’s been having. Could Anna trick the trickster and literally drive Ava crazy?

What do you think is going to happen to Abigail and Kristen? Will Ava impersonate Abigail and if so, will Chad and Tony already be headed to the island? Could Anna literally drive Ava crazy when she learns the shocking truth?

Sister Wives Spoilers: Janelle And Kody Brown Are Only Friends