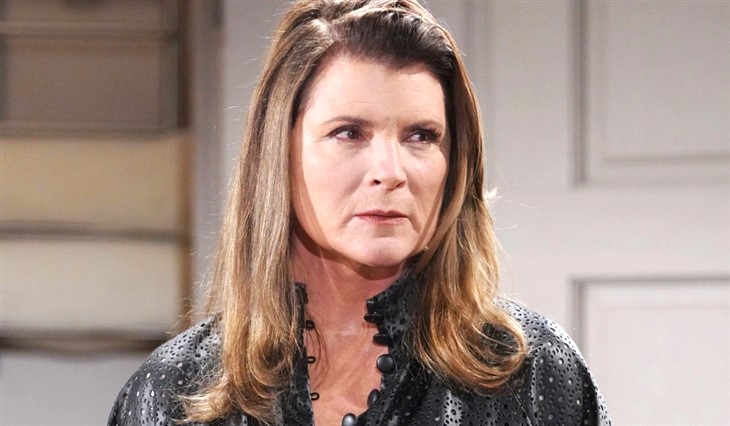 The Bold And The Beautiful Spoilers – Sheila Carter’s Pestering

B&B spoilers reveal that Sheila keeps pestering Deacon about Brooke. Deacon has kept his agreement with Brooke and Hope Logan Spencer (Annika Noelle). Deacon promised he wouldn’t tell anyone what really happened and so far, he’s kept his word. Despite Sheila constantly peppering him with questions, Deacon still hasn’t told her any information.

Sheila is so desperate for intel on Brooke’s New Year’s Eve that she even tried a different tactic. Sheila tried to get some information out of Taylor Hayes (Krista Allen). However, that aroused suspicion and then it was Taylor trying to get the dirt out of Sheila! So, Sheila went back to Deacon.

Ridge has already threatened Deacon multiple times. During the week of January 31, it happened again. Ridge pushed Deacon’s buttons, but nothing was repealed. The only thing Deacon did was drop a hint that Ridge might not know Brooke as well as he thinks. That only left Ridge baffled. After the week of February 7, Ridge will finally realize what Deacon meant.

The Bold And The Beautiful Spoilers – Deacon Sharpe Fed Up

The Bold and the Beautiful spoilers reveal that the week of February 7 will have Ridge questioning Brooke about New Year’s Eve. Once the truth comes out, Brooke will try to explain. However, Ridge will probably storm out as he will be too angry to continue talking to Brooke.

After that, Ridge will probably go to Deacon and that’s when there will be another explosive confrontation. Ridge could end up pushing Deacon too far.

It is teased that in two weeks, Deacon will finally tell Sheila everything that happened on New Year’s Eve. Deacon and Sheila can’t use this to break up “Bridge.” By then, Ridge will have already found out the truth.

However, Brooke will insist that it was only a kiss and she never slept with Deacon. Just when Ridge is about to forgive his wife because everything is always Deacon’s fault, something unexpected could happen. If Deacon and Sheila strike a new deal, “Bridge” might not survive.

Sheila would love nothing more than to destroy Brooke’s marriage, so she won’t tolerate Ridge forgiving his wife. Meanwhile, Deacon will be fed up being a punching bag for Ridge. So, Deacon and Sheila just might set a new plan in motion that could get them what they both want. At the same time, it could also jeopardize Deacon’s relationship with Hope forever.