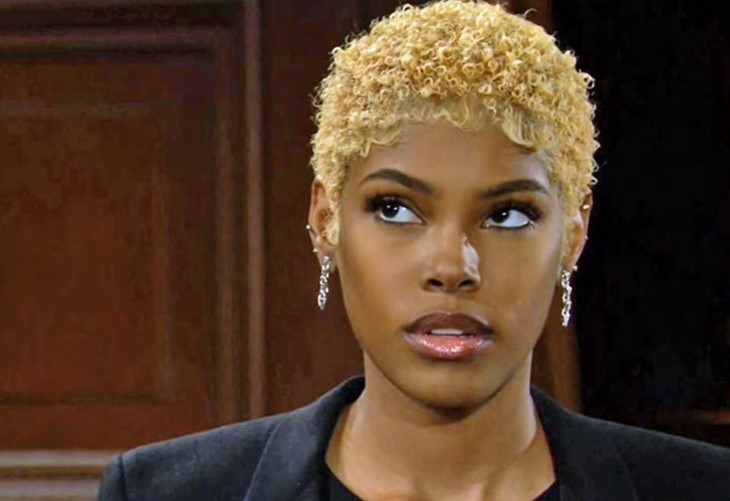 The Bold and the Beautiful (B&B) spoilers for the next two weeks, February 7 to 11, tease lots of drama. Carter Walton (Lawrence Saint-Victor) tries to behave but Paris Buckingham (Diamond White) pressures him to reconsider. Ridge Forrester (Thorsten Kaye) blows up at Brooke Logan Forrester (Katherine Kelly Lang). Sheila Carter (Kimberlin Brown) gets giddy over a discovery.

The Bold And The Beautiful Spoilers – Pressured By Paris Buckingham

B&B spoilers for the week of February 7 reveal that Carter tries to stop his blossoming romance. Carter knows that Dr. Grace Buckingham (Cassandra Creech) is serious about her blackmail and threats. Carter isn’t worried about himself, though. Carter genuinely is trying to protect Paris, who could have her life destroyed by her own mother.

Even though Carter tries to call off the romance, Paris won’t take no for an answer. Paris pressures Carter to reconsider.

Brooke decides to confess the truth to Ridge. However, she doesn’t get a chance as Taylor Hayes (Krista Allen) beats her to it. Even though Ridge initially misinterprets Taylor’s bombshell, he soon discovers Brooke has betrayed him yet again! Meanwhile, Brooke will be confused when Steffy angrily confronts her about Deacon Sharpe (Sean Kanan).

The Bold And The Beautiful Spoilers – Sheila Carter Gets Giddy

The Bold and the Beautiful spoilers reveal that Ridge won’t just learn about “Beacon.” Ridge will be disturbed and disgusted that Brooke coerced young Douglas Forrester (Henry Joseph Samiri) into keeping quiet.

While Brooke tries to explain her actions to Ridge, Sheila keeps pushing Deacon for information. Deacon eventually caves and tells Sheila everything that happened with Brooke on New Year’s Eve.

During the week of February 14, Ridge and Deacon will have an epic showdown. Sheila puts another plan into motion, but it catches Taylor off guard. Taylor is still wary but wants to know what is going on inside Sheila’s head. Taylor will probably start asking Sheila a lot of questions again. Will Sheila end up blurting out the truth and if so, what will Taylor do with the information?

Meanwhile, Brooke continues trying to save her marriage. Even though Brooke insists that there was only a kiss, how will she prove it? After all, Deacon didn’t leave until the next morning, right before Ridge walked in the door.

In order to save her marriage, Brooke might need Deacon’s help. However, Deacon wants a future with Brooke, so he will have to think carefully about how he proceeds. He could play dirty and get Brooke, but it would also derail his relationship with Hope Logan Spencer (Annika Noelle). If he’s honest and tells Ridge that nothing happened, it might score points with Hope. However, it would also mean “Bridge” will repair their relationship. So, we will have to keep watching to see how this unfolds.