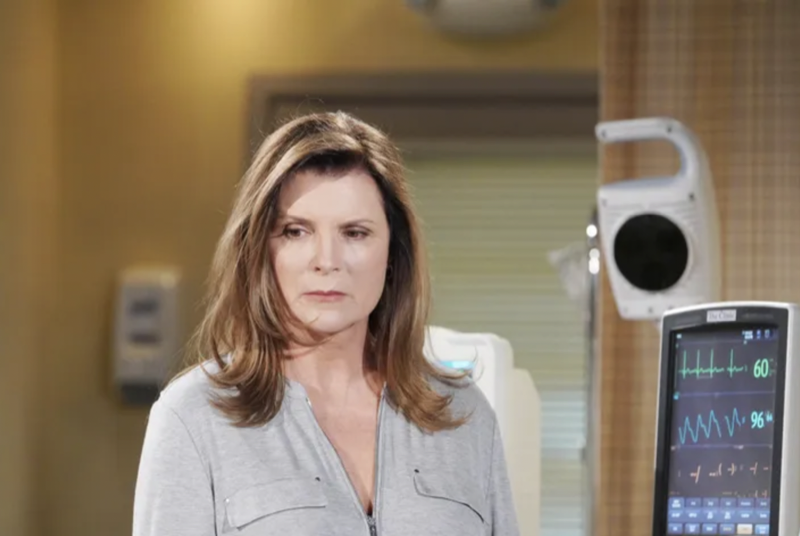 The Bold and the Beautiful spoilers document that Sheila Carter (Kimberlin Brown) is boxing herself in. It would be easy to project that almost any fugitive who plans to hold a captive, meaning John Finn Finnegan (Tanner Novlan), and is responsible for the apparent death of his adoptive mother, will be captured.

But not everyone is the infamous B&B villain, Sheila. And so projections about her being killed off are natural and may prove out. However, all who have watched this legendary character, as portrayed by the magnificent Brown, know that even a documented account of her death will be suspicious.

Bold And The Beautiful Spoilers – How Did We Get From There To Here?

Brown made her latest return to the cast last year. Devoted viewers recall that Sheila was in Los Angeles, California, in the recent past. But that return trip was rather odd.

Eric Forrester (John McCook) allowed Sheila to stay in the mansion while recovering from a modest malady. The surprise during that stint was that Quinn Fuller (Rena Sofer) defeated Sheila after both ladies physically fought, with Eric compelled to tell his ex-wife that she had to leave.

Sheila was not seen until last year when viewers saw her standing in the shadows of the Forrester mansion guest house. She revealed herself to Finn as his birth mother during his wedding day and went, based on his urging, to the wedding reception where he thought he was introducing her to his wife’s, Steffy Forrester Finnegan (Jacqueline MacInnes Wood), family.

If Steffy did not confront Sheila at Il Giardino she never would have ended up in the alley behind the popular restaurant setting. But Wood’s character did so and let Finn know what was happening.

Finn drove with with abandon, arrived at the scene, and happened upon his wife and birth mother as Sheila was aiming at Steffy. The sound of the bullet released from the chamber was muffled by the silencer Sheila attached to the weapon.

Sheila’s history implies that she would have eventually committed some horrible act. So Steffy did not provoke a first-time event. This theory is supported by what Sheila did to Finn’s adoptive mother, Li Finnegan (Naomi Matsuda).

Finn is awake and has regained his senses. He recognizes danger he is in and that a plan is needed.

Might Finn be forced to defend his own life against Sheila, with Brown’s character meeting her end in that manner? Well, that would be quite dramatic and serve as a form of soapy justice. Jack Finnegan’s (Ted King) reappearance indicates he will be involved in the drama.

But daytime is about extending the drama. So, fans are anticipating a series of events that involves multiple characters.

It is possible that Sheila will be presumed dead after a memorable climax. But will TPTB conclusively kill her off? Viewers will watch this summer, likely believing that can not happen, right?

Steve Burton Officially Pulls The Plug On His Marriage