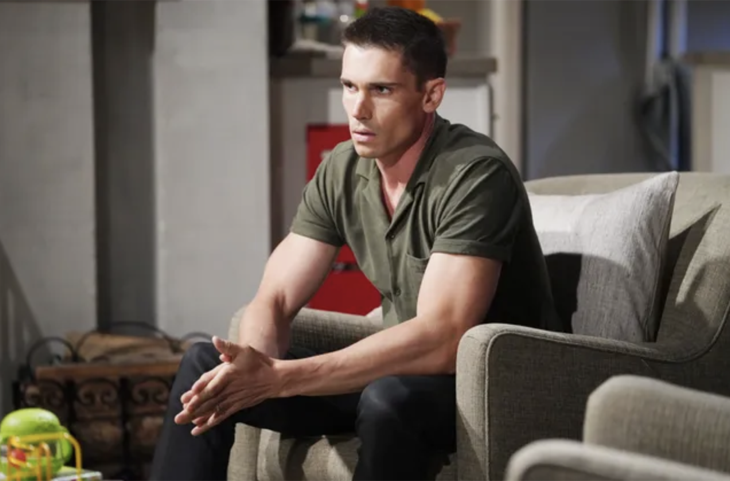 The Bold and the Beautiful (B&B) spoilers for the week of July 11 reveal that John “Finn” Finnegan (Tanner Novlan) realizes he’s in danger. Sheila Carter (Kimberlin Brown) informs Finn that she is never letting him leave… ever. Finn plays a trick on Sheila, which might be pretending to be asleep. This could lead to an unexpected alliance when Finn overhears a conversation.

B&B spoilers reveal that Sheila thinks that Finn will forgive her once she has a chance to explain. Of course, Finn just wants to get out of his homemade intensive care unit and reunite with Steffy Forrester Finnegan (Jacqueline MacInnes Wood) as well as Hayes Forrester Finnegan (Piper Harriot).

When Sheila won’t do the right thing, Finn explodes. Finn not only wants to get to a real hospital to be treated by real doctors, but he also needs to see for himself that Steffy is okay. Finn already questioned Sheila’s story that Steffy went on vacation. Finn said that it didn’t sound right, and he will continue trying to figure out this whole complicated situation.

Then, Finn starts fighting his birth mother even more. Finn tells Sheila that she’s crazy and that’s when things get even worse. Sheila shows Finn his signed death certificate and tells him to get comfortable because he is never leaving.

The Bold and the Beautiful spoiler reveal that Finn realizes that Sheila plans on keeping him there forever. That means he is officially a hostage, but nobody realizes that he is missing. Nobody is even looking for him because they think he’s dead.

Knowing that Sheila’s mental instability has skyrocketed, Finn has to tread carefully. Finn is in no condition to make a run for it. Finn also can’t physically defend himself from Sheila until he recovers. So, Finn decides to just be still and quiet while secretly gathering information, according to Novlan’s interview with Soap Opera Digest.

The Bold and the Beautiful Spoilers: Secret Alliance

Sheila and Mike Guthrie (Ken Hanes) have another argument. Finn just happens to overhear this discussion. So, it sounds like Finn’s trick might be pretending to be asleep. Finn listens to every word and realizes Sheila has a partner-in-crime.

However, Finn can also tell that Mike wants Sheila to turn herself in. Finn could use Mike’s dilemma to make his escape. However, will it be successful, or will Sheila gain the upper hand yet again?

Days Of Our Lives Beyond Salem Spoilers: Harris And Megan In Cahoots To Unite The Prisms?