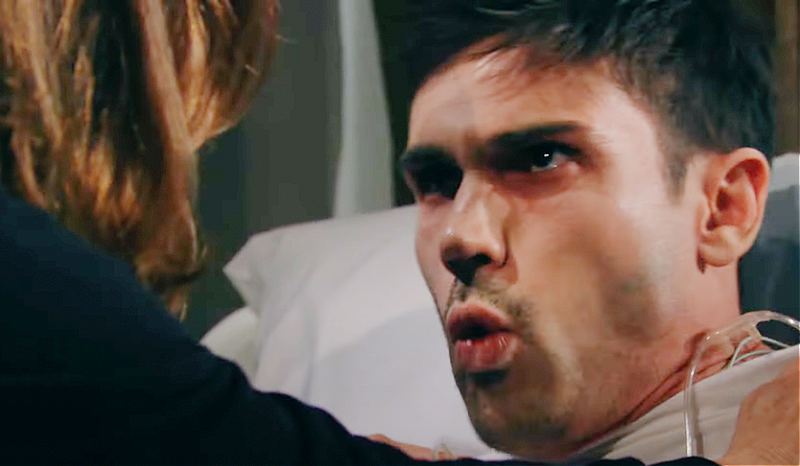 The Bold and the Beautiful (B&B) spoilers reveal Sheila Carter going into one of her craziest modes ever. And that is saying a lot for one of the most unhinged characters in the history of soaps who has been playing her brand of crazy on our screens since the 1990s.

The Bold and the Beautiful Spoilers: Finn Sees Sheila For Who She Is

If John ‘Finn’ Finnegan (Tanner Novlan) never understood what people were trying to tell him about his biological mother before, he gets it now. He is alive, can speak, can rage, and can demand to be set free and return to his wife and son (and we assume his stepdaughter, Kelly). But Sheila (Kimberlin Brown) is not having any of that. No, she has to nurse her baby boy back to health.

Sheila is thrilled to have Finn all to herself for the first time ever. She gave him up just after birth and has dreamed of this delusional day in which she could care for him and there is nobody around to stop her. She even has her old pal, Mike Guthrie, by her side.

As Finn rages at Sheila and uses the ‘c’ word — crazy — things become much worse for Finn. Sheila is crazy as ever but don’t let her son tell her that. For that one fighting word, Mommy is going to punish him and ensure he never gets out of that bed again. She will take care of him — one way or another.

Can Finn Get Help?

Like anyone else who has ever been held captive by Sheila, he needs to plot and plan a way out of this mess and back to Steffy Forrester (Jacqueline MacInnes Wood) and Hayes. When he learns that Mike Guthrie (Ken Hanes) is a part of all this, he thinks he may be able to play to Mike’s better angels, but does someone have better angels if they’re willing to help Sheila out for decades? Probably not.

Still, Finn is determined to get some sympathy so that someone will help him find his way back to Steffy and their family. Hopefully, he has better skills in escaping and tricking Sheila than Li Finnegan (Naomi Matsuda) had and doesn’t make any phone calls while she is right in earshot.

We really do not know why Li seemed so clever and then tried to call the cops while Sheila was right in the next room. She couldn’t have gotten in her car first? Hopefully, Finn at least inherited his bio mom’s great escape skills. Stay tuned to The Bold and the Beautiful weekdays to see how this story plays out.