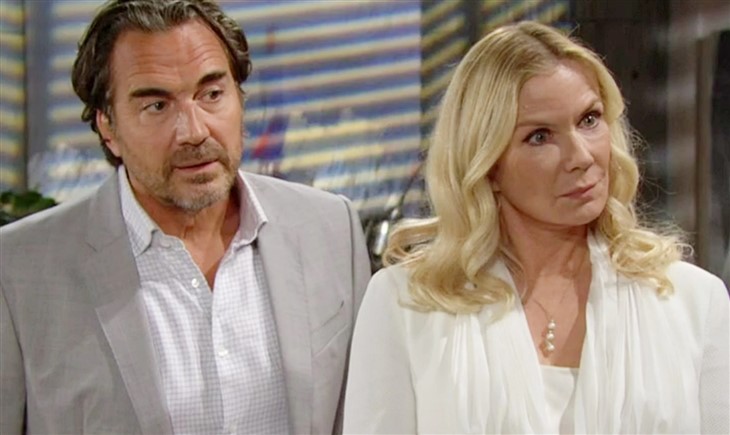 The Bold and The Beautiful (B&B) spoilers and rumors tease as Ridge Forrester (Thorsten Kaye) rejects Brooke Forrester (Katherine Kelly Lang) Taylor Hayes (Krista Allen) might reject him! Will Ridge, for possibly the first time in his adult life, be womanless and alone?

The Bold And The Beautiful Spoilers – Who Is Really His Destiny?

After Brooke seemingly lies about calling CPS on Thomas Forrester (Matthew Atkinson) Ridge is heartbroken and he considers who is really his destiny. For months, Thomas and Steffy Forrester Finnegan (Jacqueline Macinnes Wood) have been trying to push him and their mother back together, and warning that Brooke would always lie and hurt him. Now, he realizes they are probably right, and is leaning more towards Taylor Hayes (Krista Allen) being his true destiny, and he knows she and Steffy went to Aspen.

Steffy warned Ridge Taylor was tiring of his waffling back and forth between her and Brooke and was contemplating moving away for good. They’re considering property in Aspen that Bill Spencer’s (Don Diamont) trying to sell, and Ridge decides to head to Aspen too after confronting Brooke a second time.

B & B Spoilers – Goodbye To Brooke Forrester

Ridge confronts Brooke with the call in her voice that was made to CPS warning of Thomas having a knife and Douglas Forrester (Django Ferri) being in danger. She still denies making the call and is livid that someone would attempt to impersonate her, but there it is – it’s her voice, it’s her call. Ridge says it’s over and goodbye to Brooke, he’s leaving town to clear his head and get his bearings – he’s done with her lies. Ridge knows what he has to do; he has to get to Aspen before Taylor decides to move out of town forever and seal their destiny together. Little does he know that Taylor is having her own epiphany and she has to protect her own heart from Ridge hurting her over and over again with his waffling.

The Bold And The Beautiful Spoilers – What? It’s A No?

Ridge catches up to Taylor in Aspen after saying a final goodbye to Brooke, and making up his mind between the two, and deciding he wants Taylor back. He’ll be sadly disappointed when she tells him no, and won’t believe it; but Taylor’s seen him do this before and waffle back to Brooke, and she’s tired of it. Ridge will try to convince Taylor that he’s back for good this time but she’s not having it after this many years of being hurt when he waffles back to Brooke.

Ridge is bewildered, brokenhearted, and doesn’t know which way to turn; he’s never had to deal with this situation before and doesn’t know how. For the first time he can remember in his entire adult life, he’s without a woman and Taylor isn’t his go-to when he’s dumped Brooke!