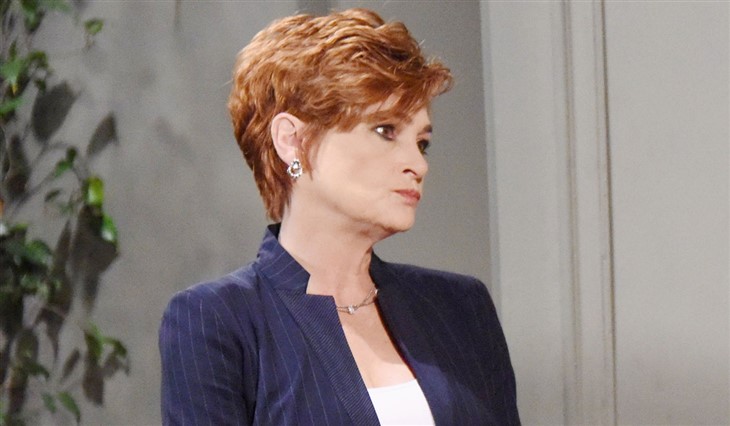 General Hospital (GH) spoilers tease victim number four is nearly on the hook. As the PCPD works furiously to catch this psycho before they can strike again, alas, they will be too late. Diane Miller (Carolyn Hennesy) will awake from her post-surgical coma with details that may help the PCPD find their guy — or gal! But whether or not Diane will wake in time to help save the fourth victim’s life is still up in the air. Will Dr. Hamilton Finn (Michael Easton) have more anti-venom at the ready and waiting on the next poor victim? We sure hope so!

The police have been operating with the theory that Sonny Corinthos (Maurice Benard) may be a major target of The Hook. All three victims — Ava Jerome Cassadine (Maura West), Brando Corbin (Johnny Wactor), and Diane — are all linked to him and share no other ties that bind them.

But the police have started to ponder a new angle after their leads run dry on Dex Heller (Evan Hofer). What if one of the victims was a random accident that happened because they were in the wrong place at the wrong time? It’s possible Ava wasn’t the intended target the first time, but that’s unlikely given that she was alone in the woods on the Quartermaine grounds.

It’s possible Brando wasn’t who the killer was after, but the only other people who The Hook could likely have been after instead were Kristina Davis (Lexi Ainsworth) or Josslyn Jacks (Eden McCoy) — both of whom are linked to Sonny. It’s equally as possible that Diane wasn’t the mark, as one wouldn’t have expected to find her late at night in Brando’s garage, but anyone else who would have been there would also probably have been connected to Sonny.

GH Spoilers — Who Will It Be, And Will They Survive?

Rumors are swirling that the next victim could be Liesl Obrecht, but it’s not likely given how little she’s been out and about in Port Charles as of late. Liesl is still cooped up and canoodling with her beau, Scott Baldwin (Kin Shriner), and they don’t come up for air often.

Some have suggested The Hook will go after Kristina, but the focus on Victor Cassadine (Charles Shaugnessy) wanting to protect her, and Sonny’s constant security presence makes it unlikely that anyone in his immediate family is going to be harmed by this killer.

Perhaps some of the most targeted and least protected people in the community are PCPD officers — when they’re off duty. Unfortunately, this might be the case for Officer Rory Cabrera (Michael Blake Kruse). It’s possible Trina may confess her feelings for Spencer Cassadine (Nicholas Chavez) to Rory, leading him to tell her he needs some time alone. A few days of radio silence from Rory wouldn’t make Trina think twice after such a conversation, but if Rory doesn’t show up for work, that could lead Commissioner Jordan Ashford (Tanisha Harper) to his door. What might they find? Will Rory get hooked?

Jordan will be angry that a fourth attack has occurred on her watch. How many bodies have to pile up before they catch this creep? Sadly, the fourth may not even be the last, given that the person attacked will turn the whole investigation on its head. Victim number four won’t have similar connections to Sonny, and the PCPD will be beside themselves with questions. Let us know who you think is behind The Hook!

As always, tune into GH on ABC every weekday, and keep your screen fixed here for more updates, news, and spoilers headed your way.