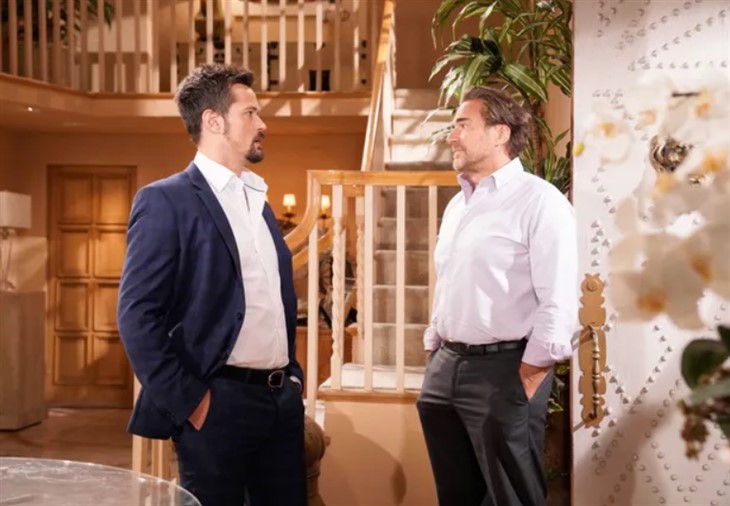 The Bold and the Beautiful spoilers show that the truth has come out, and it wasn’t who we thought would expose it. We had our money on Douglas Forrester (Henry Samiri) saying something at the wedding, and while he did tell someone, it was Steffy Forrester (Jacqueline MacInnes Wood), against all odds, who did something about it.

She confronted her brother, Thomas Forrester (Matthew Atkinson) and told him he needed to tell people the truth. If he is so confident that the only reason their father, Ridge Forrester (Thorsten Kaye) is with Taylor Hayes (Krista Allen) is for love and has nothing to do with the CPS call, then it wouldn’t matter. We know that’s not the case though, right?

The Bold And The Beautiful  Spoilers – Taylor Hayes Feels Guilty

We saw Taylor come down for her wedding, but she stopped when she got to the bottom. She knew something was wrong and she knew that the call to CPS had a huge reason for Ridge to leave Brooke Logan (Katherine Kelly Lang).

This may be the turning point for Taylor where she realizes that Ridge may have only chosen to be with her out of anger for Brooke, however, if that anger was misled and she is innocent in the whole thing, she would feel guilty. How would she feel if she was thrown under the bus and lied about only to see Ridge go off with another woman to get married?

We’ve been saying it over and over and it looks like it is going to happen. The Bold and the Beautiful spoilers say Ridge will find out the truth and realize that he had left Brooke over a lie, and worse yet, a lie that was created and perpetuated by his own son. If Ridge knew that it had been a fake call and that someone was setting up Brooke, he probably would not have rushed to Taylor the way that he did.

Now, with the truth out, we can almost guess the entire next part of the storyline with Ridge going back to Brooke and apologizing for everything that happened, including almost marrying Taylor. If they really wanted to throw us a curveball, Ridge will shrug it off and continue with the marriage if Taylor allows it.

What do you think? Will Thomas be shunned by his family members and who would want to be around him? Share your thoughts and remember to keep watching the CBS soap to see what happens next.