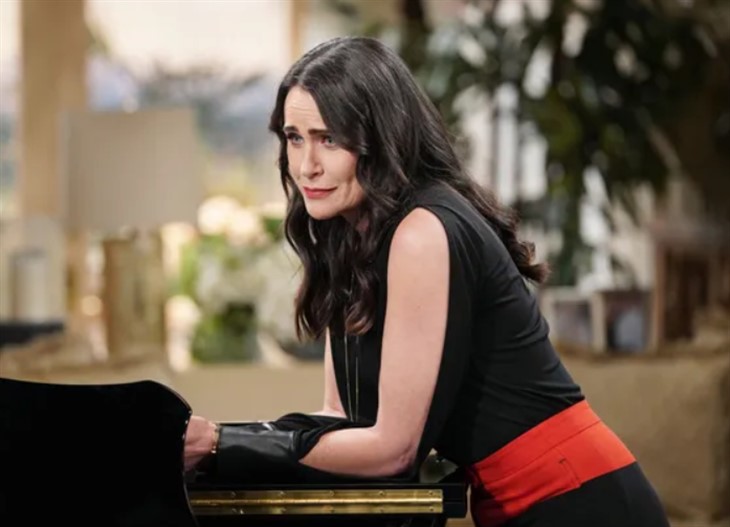 The Bold and the Beautiful (B&B) spoilers reveal that Quinn Forrester (Rena Sofer) races to stop Carter Walton’s (Lawrence Saint-Victor) wedding. However, Quinn must have issues using a car. In a photo published in Soap Opera Digest, Quinn rides a beach cruiser bicycle, complete with the wire front basket, to get to the wedding before she loses Carter forever.

The Bold And The Beautiful Spoilers – Carter Walton’s Wedding

B&B spoilers reveal that Carter refused to take Quinn’s advice. Carter can’t have Quinn right now, so he is rushing into marriage with someone he’s not in love with. It was explained in Soap Opera Digest that Carter wants to have a family, which means he needs to find someone to settle down with.

Even though Carter is in love with Quinn, he is determined to be faithful to Paris Buckingham (Diamond White) once they tie the knot. Of course, Carter and Paris will get pushback on their wedding plans. This will only push Carter to marry Paris as quickly as possible.

Quinn already opened up to Wyatt Spencer (Darin Brooks) about her feelings. Quinn has no intention of leaving Eric Forrester (John McCook) to be with Carter, though.

That will change once Quinn and Bridget Forrester (Ashley Jones) bust in on Eric and Donna Logan (Jennifer Gareis) in bed. Once Quinn realizes that she’s lost Eric, she will try to find Carter. However, with Carter and Paris getting married right away, the clock is ticking.

The Bold And The Beautiful Spoilers – Beach Cruiser Emergency

The Bold and the Beautiful spoilers reveal that a photo appears in Soap Opera Digest that shows how far Quinn is willing to go to stop Carter’s wedding. Even though this particular issue of the magazine won’t be released until Friday, June 24, an insider shared it on Twitter.

It shows Quinn riding a beach cruiser along the coast. So, it seems that Quinn was unable to get a car or a taxi and grabbed a bicycle.

In a previous issue of SOD, head writer and executive producer Bradley Bell teased that there would be some comedic scenes regarding this wedding crasher. What would be quite amusing is if Quinn didn’t just run into the ceremony but rode her bicycle inside.

Just imagine the chaos as Quinn bursts through the altar doors riding a bike, knocking everything over. Quinn might even run over Paris in her attempt to get back her man! Share your thoughts about this storyline. Remember to keep watching the CBS soap to see what happens with Quinn, Carter, and Paris.