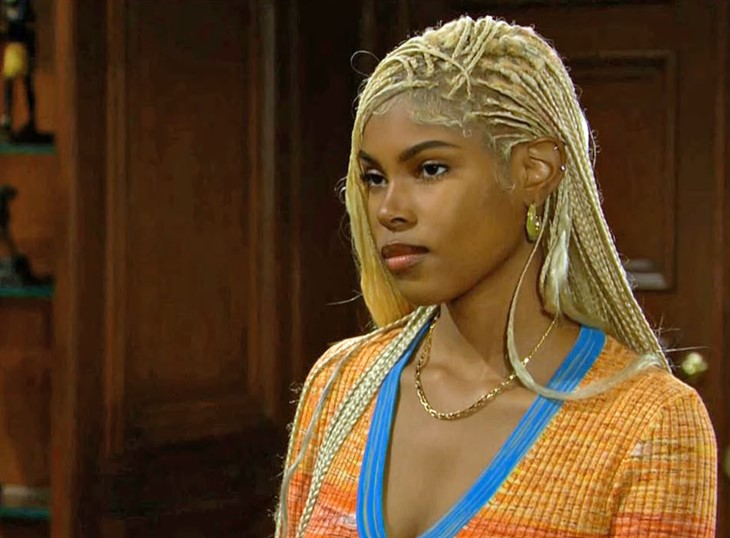 The Bold and the Beautiful (B&B) spoilers for Thursday, June 23, 2022, reveal Carter getting a lecture from the King of Bad Decisions himself, Ridge Forrester.

Yes, Paris Buckingham (Diamond White) said she didn’t want to get married. She was too young, so she just had to turn down Zende Forrester (Delon De Metz), right? Well, at least she eventually told him it was all because she had a thing for Carter Walton (Lawrence Saint-Victor). But all that eavesdropping also told her that Carter still has a thing for Quinn Fuller Forrester (Rena Sofer), so when Carter proposed to HER and NOT Quinn, Paris wasn’t quite sure what to say.

Well, she figures it out quickly and says yes. Of course, she does. And now she is wearing the ring Quinn made that she didn’t even give Carter. And he didn’t buy it either. But Paris happily shows it off to her mother, who is just horrified. This is the last thing Grace Buckingham (Cassandra Creech) wanted but she has to live with it now — or does she? She can berate Carter some more and try to do something about this. There has to be a big reason we do not know that Grace is so against Paris being anywhere near Carter.

B&B Spoilers – Ridge Forrester Needs To Have A Talk

Ridge Forrester still can’t believe the messes his buddy Carter keeps getting himself into. Wasn’t one fiance named Zoe Buckingham (Kiara Barnes) enough last year? Well, clearly not. So, wasn’t an affair with Quinn enough on top of that? And now Grace wants to sue him for sexual harassment and he proposed to Paris.

What is wrong with Carter? That’s exactly what Ridge wants to know. None of this has been like Carter and something else must be going through his mind. We know Carter wants to settle down, but there must be a good reason he chose this woman.

Well, it takes a man who makes impulsive decisions about women to know one and Ridge certainly fits that bill. He has a talk with Carter and asks him if this is what he really wants and Carter can’t seem to answer him because he’s not going to lie. But Ridge can’t definitely see that Carter is a man whose heart is not in this brand-new engagement. Stay tuned to The Bold and the Beautiful weekdays to see how these stories play out.