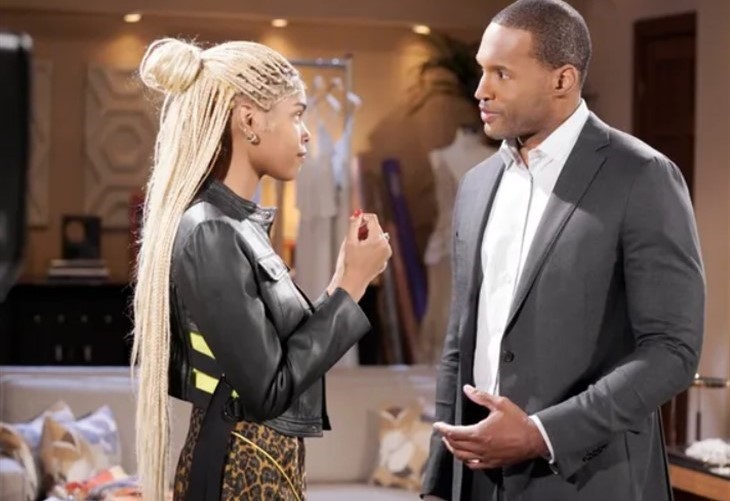 The Bold and the Beautiful spoilers reveal that Carter Walton (Lawrence Saint-Victor) and Paris Buckingham (Diamond White) receive pushback on their wedding. The couple decides to respond by getting married immediately. However, could they decide to elope? If so, what happens if Quinn Forrester (Rena Sofer) finds them after they’ve already said, “I do?”

The Bold And The Beautiful Spoilers – Grace Buckingham’s Vow

B&B spoilers reveal that Carter and Paris get engaged. Paris goes to tell her mother the news and show off the engagement ring. However, Grace isn’t happy about it and refuses to accept Paris’ decision. In fact, Grace tells Paris that the wedding isn’t going to happen.

Fans know just how far Grace has gone already to keep Paris with Zende Forrester (Delon de Metz) instead of Carter. How much further will she go to stop Paris from making a big mistake?

Grace won’t be the only one who doesn’t think Carter and Paris’ wedding is a good idea. Quinn has already tried convincing Carter to reconsider. However, she has been unsuccessful. As long as Quinn is with Eric Forrester (John McCook), she is unavailable to Carter.

There is also Ridge Forrester (Thorsten Kaye), who doesn’t understand what Carter is thinking. Ridge was already blindsided after finding out Paris dumped Zende and is with Carter now. Ridge will be even more baffled to learn that Carter and Paris are getting married when they haven’t even dated yet.

The Bold And The Beautiful Spoilers – Carter Walton And Paris Buckingham Elope?

The Bold and the Beautiful spoilers reveal that there could be more characters who try to get Carter and Paris to call off or postpone the wedding. In a preview clip, Carter told Paris that they should get married right away. Plus, head writer and executive producer Bradley Bell told Soap Opera Digest that Carter and Paris move up the wedding date.

However, they could still worry that someone will crash the wedding or try to prevent the ceremony from taking place. It’s possible that Carter and Paris could decide their only option is to elope.

Around the time of Carter and Paris’ wedding, Quinn and Bridge Forrester (Ashley Jones) walk in on Eric in bed with Donna Logan (Jennifer Gareis). In typical soap fashion, Quinn will realize she needs to be with Carter. So, Quinn will try to stop the wedding, especially when she learns that the wedding is happening at that moment.