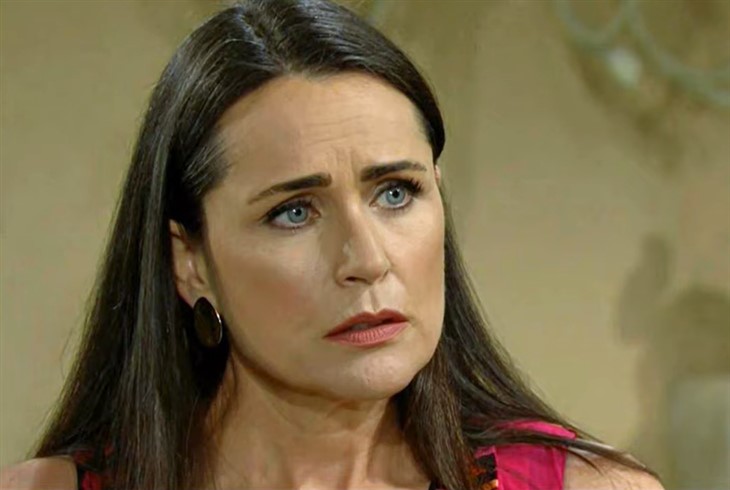 The Bold and The Beautiful (B&B) spoilers and updates tease that Quinn Forrester (Rena Sofer) will come to the rescue when Paris Buckingham (Diamond White) comes onto Carter Walton (Lawrence Saint-Victor)! This will take place in an upcoming B & B episode!

Even though her mother Grace Buckingham (Cassandra Creech) made it clear she didn’t want Paris with Carter, but with Zende Dominguez (Delon de Metz) she won’t stay away from Carter! She even blackmailed Carter to get him to break it off with Paris, and he did break up with her but she won’t take no for an answer! She even told Zende that she had wanted to slow things down with him because she had been seeing Carter!

Now Paris won’t give it up – she doesn’t care what her mother thinks or what Carter did about it. She wants Carter and she’s not going to give him up even though he gave her up!

B & B Spoilers – Paris Buckingham Is Getting A Little Too Brave

Quinn knows the story inside and out of what happened when Zende was going to propose to Paris. Zende had Quinn’s company make him a very expensive custom engagement ring for Paris that she never saw her wear. She had asked Zende why and what happened, and he admitted he never got the chance to pop the question because she wanted to slow things down. Quinn found out afterward that it was because Carter and Paris had started an affair, and office gossip told her Grace put an end to it. Carter admitted to Quinn that Grace had blackmailed him into breaking things off with Paris, and Quinn said he was too good for Paris!

Knowing what she knows, and not particularly liking Paris, especially after what she did to Zende, Quinn starts keeping an eye on Paris around the office. Unfortunately, Paris works in the same area of Forrester Creations that Carter works in so sometimes it’s difficult for them to avoid each other. Quinn doesn’t want Carter to have to deal with Grace coming in and blackmailing him over misunderstandings – she’d threatened to go to Ridge Forrester (Thorsten Kaye) and have him fired!

Quinn makes no bones about her opinions of Paris, and she could come up with a Stephanie Forrester (Susan Flannery) type nickname for her! Pretty soon she notices Paris sneaking around Carter’s office and she doesn’t have any files in her hand or papers for him to sign!

B & B Spoilers – Quinn Forrester To The Rescue

It is difficult for Carter to just tell Paris to go away, because he did have feelings for her and is trying to extinguish a torch! Paris knows that her mother is the cause of their breakup but she doesn’t care – the heart wants what the heart wants, and Paris wants who she wants! This time Quinn follows Paris and waits outside Carter’s office to eavesdrop on the conversation – in a way protective of Carter, not just being nosy! Carter says “NO, PARIS!” and Quinn steps in to see Paris pushing herself onto him and she quickly puts a stop to it! Now it’s Quinn threatening to get Paris fired instead of Grace threatening to get Carter fired!

Amber Heard Supported By Majority Of Bots On Twitter