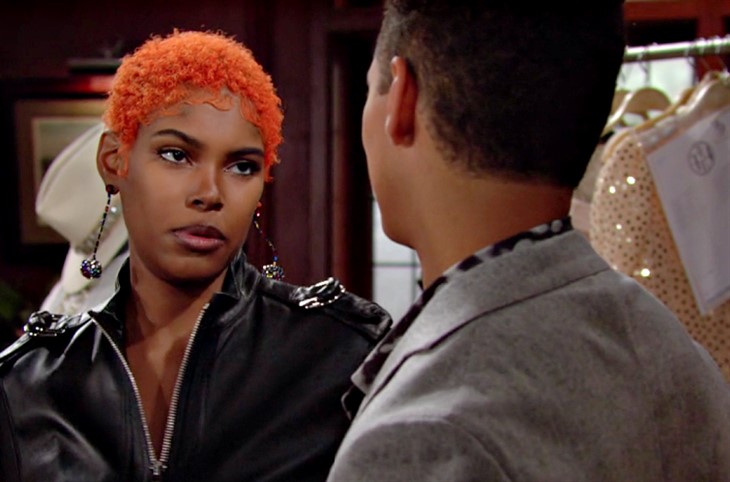 The Bold and the Beautiful (B&B) spoilers for Thursday, May 5, 2022, reveal Paris possibly making a major mess of her life.

It doesn’t matter how many times Carter Walton (Lawrence Saint-Victor) tells Paris Buckingham (Diamond White) that they shouldn’t be together and sleeping together was a mistake. Paris is clearly more obsessive about men than Zoe Buckingham (Kiara Barnes) ever was and it becomes obvious why Zoe never really wanted her around when she first arrived in LA.

Paris still thinks she and Carter are going to be together forever so she breaks the news to Zende Forrester (Delon De Metz), who thought that he and Paris would be together forever. Heck, he even picked out a ring months ago. Needless to say, Zende is both shocked and dismayed and a little broken hearted. He truly had no clue. This is the second Buckingham sister he has had feelings for and the second one that chose Carter over him. Will Zende start getting a complex?

Little does Paris know all the time that Quinn Fuller Forrester (Rena Soer) has been spendin with Carter and how close they really were last year. It was more than just sex for them. They had true feelings for each other and it seems like those feelings haven’t gone away. However, they have yet to truly confront them and admit this.

While Sheila Carter (Kimberlin Brown) has spent 40 years on CBS Daytime coming undone, Deacon Sharpe (Sean Kanan) is not quite used to it so he actually believes he can reason with one of the most unhinged characters that soaps have ever seen.

So, Deacon once again tries to reason with this woman who just killed her own son and then let him die on the scene so that she wouldn’t have to spend life behind bars. She wants to see Hayes and she wants to see him now and Deacon can’t seem to talk her out of this quest. Boy will Steffy Forrester (Jacqueline MacInnes Wood) be surprised when Sheila shows up at her door. Stay tuned to The Bold and the Beautiful weekdays to see how these stories play out.

Days Of Our Lives Spoilers: Eli Finally Wakes Up