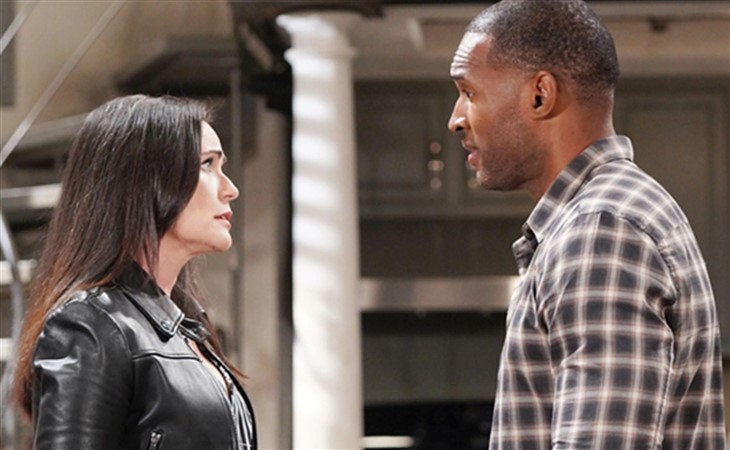 The Bold and the Beautiful (B&B) spoilers for Friday, May 6, 2022, reveal Quinn giving some straight talk to Carter when he needs it.

The Bold And The Beautiful Spoilers – Paris Confesses To Zende

While Quinn Fuller Forrester (Rena Sofer) has no idea that her husband, Eric Forrester (John McCook), is sleeping with Donna Logan (Jennifer Gareis) and likely has been for the last six months, she still finds herself drawn to Carter Walton (Lawrence Saint-Victor) and their caring friendship and easy rapport. In fact, these two never look so comfortable than when they are with one another.

And once again Paris Buckingham (Diamond White) makes her presence known as she arrives in the room making eyes at Carter and acting like they are an official pair. Carter has told her time and time again that they are not, but she already told Zende Forrester (Delon De Metz) that they are. After Quinn sees Paris and Carter together, she tells him there’s something about that girl that rubs her the wrong way and she knows that Carter can do better than her. To us, it looks like a fatal attraction thing is on the way.

Poor Steffy Forrester (Jacqueline MacInnes Wood) seems to be recovering pretty well at home, especially with Liam Spencer (Scott Clifton) and her parents, Taylor Hayes (Krista Allen) and Ridge Forrester (Thorsten Kaye) to take care of her. But when she has a moment alone, Sheila Carter (Kimberlin Brown) stops by with a desperate look on her face. She says she is there to see her grandson, Hayes, but she also really wants to know what Steffy remembers about that terrible night.

Steffy starts to get very nervous with Sheila hanging around and she asks her to leave, but Sheila doesn’t want to leave. Steffy knows there is something just not right about this situation and Sheila’s state of mind, but she just doesn’t know what it is — yet.

Is Steffy about to remember everything with Sheila right there? If she does, she is going to need to play it real cool or who knows what Sheila will do because the woman is completely detached from reality and unhinged. Stay tuned to The Bold and the Beautiful weekdays to see how these stories play out.

GH Spoilers: Esme Boils Over When She Catches Spencer Snooping