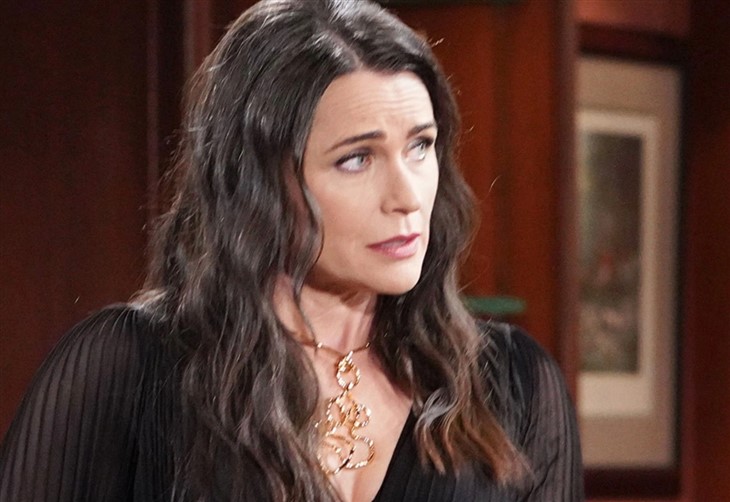 The Bold and the Beautiful (B&B) spoilers for Wednesday, June 29, 2022, reveal Quinn realizing her marriage is finally over, but also realizing this is a good thing. Eric doesn’t love her and she really doesn’t love him anymore either. She just has something really important to do before she does anything else.

Quinn Fuller Forrester (Rena Sofer) just has to stop Carter Walton (Lawrence Saint-Victor) from making the biggest mistake of his life by marrying Paris Buckingham (Diamond White). He told Ridge Forrester (Thorsten Kaye) he is madly in love with Quinn, but he didn’t want Paris to tell Eric this and hurt the man who has been so good to him. Ridge thinks his friend is nuts, but is willing to go along with this plan anyway.

So, Quinn knows Carter loves her and not Paris and she has to stop him from actually marrying this young woman who is more obsessed with Carter than in love. To get there fast, Quinn gets on a bicycle and pedals down the boardwalk to make it to Il Giordino where Carter managed to throw together an impromptu wedding.

Expect a few comical moments along the way as Quinn races to claim her man before it’s too late. The soap went on location right in its own backyard for these scenes that will remind you of Jack Tripper biking at the Santa Monica pier on Three’s Company.

Meanwhile, Dumb Carter is at the altar all ready to take his vows and make Paris a very happy young woman. He almost married her sister, Zoe Buckingham (Kiara Barnes), a year ago, so why not go through with it with this sister. Grace Buckingham (Cassandra Creech) still doesn’t trust this man at all but it is willing to sit through the wedding with gritted teeth.

Will she be happy to see Quinn show up, declare her love for Carter, and get Paris out of this mess she has gotten herself into? Only time will tell on that one. And only time will tell if Quinn’s words still have any meaning when Paris is standing there begging to get on with the ceremony. Stay tuned to The Bold and the Beautiful weekdays to see how these stories play out.