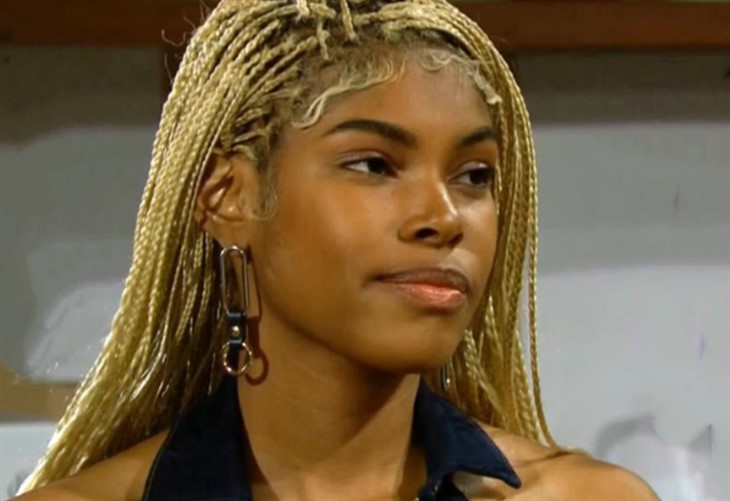 The Bold and the Beautiful spoilers reveal that Paris Buckingham (Diamond White) will be dumped at the altar. Carter Walton (Lawrence Saint-Victor) might be apologetic but won’t be able to marry Paris once Quinn Forrester (Rena Sofer) crashes the wedding. However, could Paris complicate “Quarter?” Is it possible Paris finds out she’s pregnant?

The Bold And The Beautiful Spoilers – Quinn Forrester the Wedding Crasher

B&B spoilers reveal that Quinn is devastated that Carter is marrying Paris. What makes it even worse is that Quinn knows that Carter isn’t in love with Paris. Carter is doing it partly to move on from Quinn and have a family. However, Carter is also trying to prevent Paris from ruining Quinn’s marriage.

Once Quinn finds out about Donna Logan (Jennifer Gareis), Eric Forrester (John McCook) feels awful. To try and make sure Quinn can find happiness again, he encourages her to stop Carter’s wedding before it’s too late.

Quinn will go to extreme measures to get to the wedding before it’s too late. Quinn even rides a bicycle as she pedals as fast as she can to reach the wedding. Quinn does make it to the wedding and announces that she’s in love with Carter. Due to Carter’s feelings for Quinn, he won’t be able to continue marrying Paris. So, expect Paris to get dumped at the altar.

The Bold And The Beautiful Spoilers – ‘Quarter’ Face New Complication?

The Bold and the Beautiful spoilers reveal that no soap romance is all roses. In fact, soap couples don’t survive if there isn’t some kind of drama to keep viewers tuning in. So, what could Carter and Quinn face next now that the truth is out? It’s possible that Paris will continue to cause problems.

Paris could find out that she’s pregnant. However, is the baby daddy Carter or Zende Forrester (Delon de Metz)? Even though Paris hasn’t been intimate with Zende recently, perhaps they get back together after “Quarter” goes public. However, Zende might still not be the one that Paris really wants.

So, Paris might claim that the baby belongs to Carter even though it’s probably Zende’s. Of course, Carter will want to do the right thing for his child. Carter might break up with Quinn and tell her he has to be with Paris for the baby. If the baby is really Zende’s, then how will the truth come out? We have a feeling that Grace Buckingham (Cassandra Creech) being a doctor might play into this and reveal the truth.

What do you think is going to happen after Quinn crashes Carter and Paris’ wedding? Could Paris end up pregnant and use the baby to get Carter back?