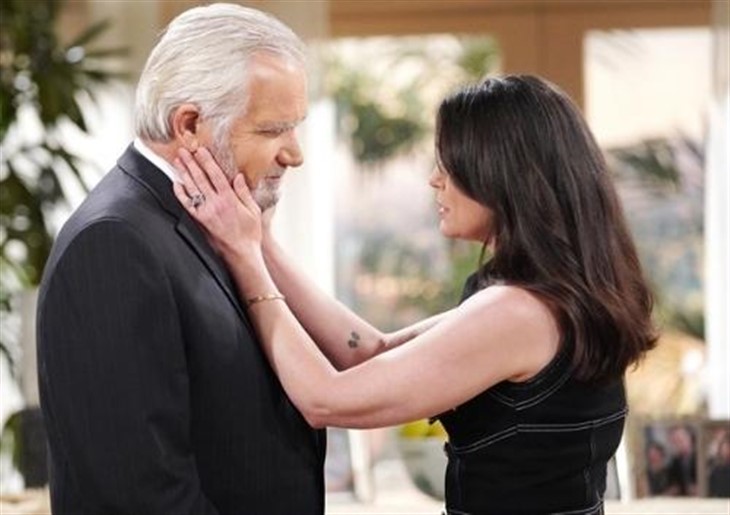 The Bold and the Beautiful spoilers reveal that Quinn Forrester (Rena Sofer) gave Eric Forrester (John McCook) a ring. It will keep track of Eric’s health, including his heart rate. When Eric hops into bed with Donna Logan (Jennifer Gareis), his heart rate will spike. Quinn could think he’s having a heart attack and rush to save him only to find out what’s really got his heart pumping.

The Bold And The Beautiful Spoilers – Quinn Forrester’s Gift

B&B spoilers reveal that Quinn gave Eric a special ring as a gift. It was a present that was meant to have a meaningful purpose. Quinn still loves and cares for Eric very much even though she also has feelings for Carter Walton (Lawrence Saint-Victor). Since “Queric” are not sleeping together, Quinn is trying to show her love in other ways.

The ring just isn’t for show, though. The ring will keep track of Eric’s health metrics, including his heart rate.

Eric will continue having an affair with Donna. The next time that Eric sleeps with Donna, his heart rate is going to spike. When Quinn gets an alert about Eric’s rate, she might assume it’s from pickleball. After all, that is usually the excuse Eric gives when he rushes away. However, the longer and higher the heart rate goes, the more concerned Quinn could become.

The Bold And The Beautiful Spoilers – Saving A Man’s Life

The Bold and the Beautiful spoilers reveal that Quinn might try to call, text or Facetime Eric to see if he’s okay. If Eric is in the middle of playing “pickleball” with Donna, he probably won’t answer. This will make Quinn concerned that Eric must be in mortal danger. Thinking he’s probably having a heart attack, Quinn could rush to save her husband’s life.

Knowing Quinn, she might even have GPS on the heart ring. That will alert her to where Eric’s exact location is at that specific time. Just imagine Quinn busting through the door expecting to see Eric lying motionless on the floor from a heart attack. Instead, Quinn just might find Eric in bed with her rival. How will Quinn react to seeing Eric and Donna in bed together?

Actor John McCook teased that there would be consequences for Eric’s betrayal. Speaking to Soap Opera Digest, the actor said,

“They’ve set up the jealousy factor already, when Quinn persuaded Eric to fire Donna [during the ED storyline], so this will be a new chapter. I can say, we are all enjoying this. We are playing a different story than we did before. Eric is thinking about himself and Donna, and yet he can’t get Quinn off his mind, either. Ramifications to follow.”