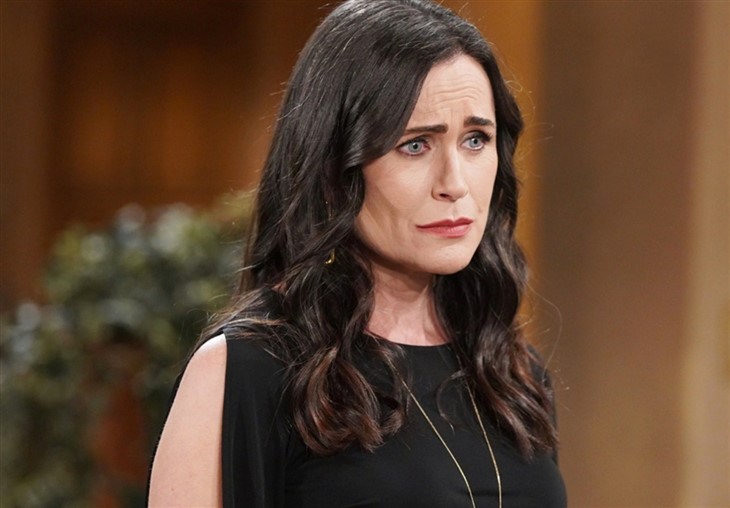 The Bold and the Beautiful (B&B) spoilers document that Quinn Fuller (Rena Sofer) created a special ring for her beloved husband. She told Carter Walton (Lawrence Saint-Victor) the full story about the disguised heart monitor. Quinn left that medical snooping detail out of the conversation she later had with Eric Forrester (John McCook).

Eric was not told that Quinn inserted a heart monitor into the ring she presented to him as a symbol of their renewed connection. He was surprised and thankful while also being conflicted.

Donna Logan (Jennifer Gareis) is a major threat to Quinn’s marriage. But she is not aware of that reality.

Eric and Donna were together when Quinn thought he was playing pickleball. That has become Eric’s regular out when he wants to spend some romantic time with his former wife.

Quinn nearly spotted Donna when Eric answered what he thought was a traditional phone call. Instead, he approved of a video chat, with Quinn seeing a shirtless Eric propped up in front of a pillow and headboard.

Eric is telling Donna that he has no qualms about deceiving Quinn. That attitude comes from what happened between Sofer’s character and Carter in the recent past.

As devoted viewers recall, Eric was diagnosed with ED. He did not tell Quinn about it, which he should have, but began distancing himself from her because of his pride.

However, Eric’s initial approval of Quinn’s connection with Carter and that trio’s peaceful resolution implied that all was okay. Obviously, Eric’s damaged psyche created a revenge play.

So, Quinn will either determine that Eric’s heart is elevated during more periods than it should be, or additional digital technology will be accessed. It would be intriguing if a Global Positioning System (GPS) tracker is part of Eric’s ring.

Eric certainly will not like learning that Quinn is digitally snooping on him, even if his heart rate is the only thing she is monitoring. But if Quinn can also access his future locations, then the drama will be even greater on B&B.

Donna looks like Eric’s better match. Possibly, she has always been that. Quinn disagrees but will likely lose interest in Eric when eventually learning about his renewed spark with Donna. Sofer’s projects toward a reunion with Carter by that point in the plot.