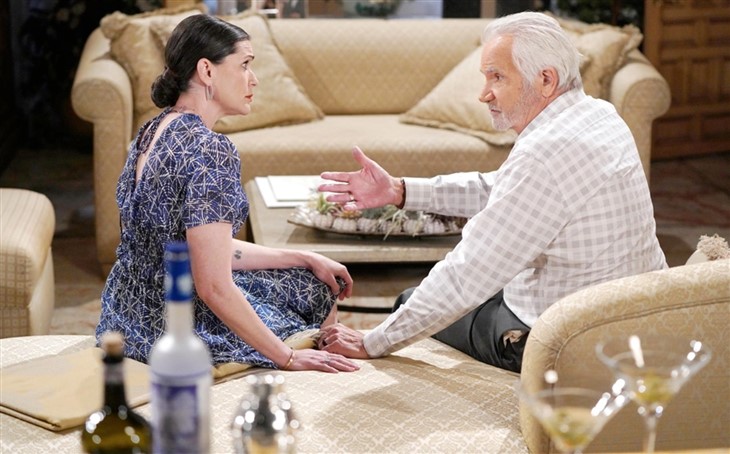 The Bold and the Beautiful (B&B) spoilers for Monday, June 27, 2022, reveal Quinn having a meal at the club and making a shocking discovery.

The Bold And The Beautiful Spoilers – What Could Eric Forrester Be Doing?

Although she knows her marriage has not been perfect at all, Quinn Fuller Forrester (Rena Sofer) has still had faith in Eric Forrester (John McCook) and could never imagine he is cheating on her. She does know that he has been playing an awful lot of pickleball of late and that it has been elevating his heart rate. Both she and Bridget Forrester (Ashley Jones) are concerned and discuss this over a meal at the club.

That is when Quinn makes the shocking discovery that the pickleball court has been closed for months. How can Eric have been playing pickleball then? She also learns that Eric is there at the club and demands that the waiter tell her exactly where her husband is. Quinn is about to be in for a rude awakening and Bridget is about to see her father in a way no daughter should ever, ever see their dad.

While Quinn starts realizing that Eric has been lying to her, Eric is busy making promises to Donna Logan (Jennifer Gareis). Nope, he hasn’t left his wife and he is not sure what to do about that, but he does tell Donna that their future together is bright. How bright can it be when they are sneaking around, something Donna is tired of doing? She has already expressed that and Eric was practically speechless. He is happy the way things have been, but is that enough?

Eric has no idea what to tell her but soon his mind will be made up because once Quinn learns what’s really going on there will be no way to save this marriage that should have been ove and done with a year ago. But will Donna have to endure the wrath of Hurricane Quinn first?

And then what about Carter Walton (Lawrence Saint-Victor)? He is all set to marry Paris Buckingham (Diamond White) and wants to make that happen right away, for Eric’s sake he says. Well, he might want to rethink his actions before it’s way too late. Stay tuned to The Bold and the Beautiful weekdays to see how these stories play out.