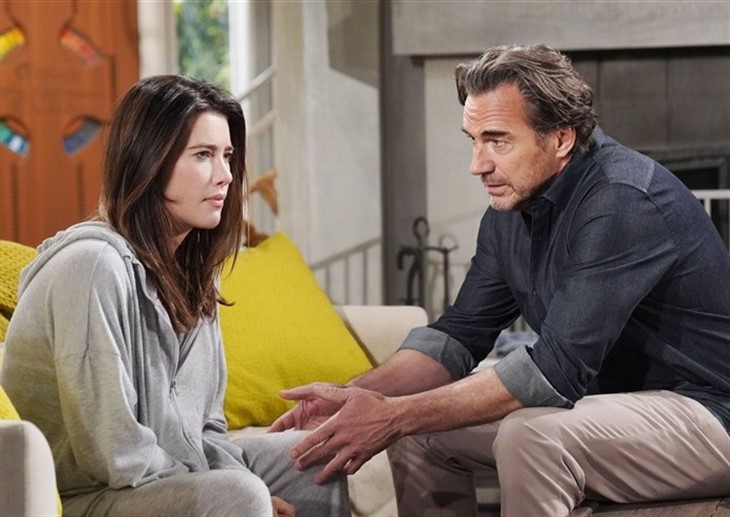 The Bold and the Beautiful (B&B) spoilers for Thursday, May 12, 2022, reveal Steffy determined to bring down the crazed woman who took her husband and ruined her life.

Sheila Carter (Kimberlin Brown) is so thrilled that Steffy Forrester (Jacqueline MacInnes Wood) invited her over to see Hayes that she can hardly contain her joy. Maybe Steffy won’t remember that really happened that fateful night she killed her own son and she can forge a relationship with her grandson. Maybe everything won’t go wrong for Sheila this time and she can avoid spending the rest of her life behind bars.

So, she heads over to Steffy’s house oblivious to the fact that this might be a trap. She puts on a smile to talk to Steffy and Steffy invites her in with her own smile until Steffy stops smiling and starts talking. What Steffy has to say alerts Sheila to the fact that she might be in some major trouble so her whole facade is over as soon as it begins.

Sheila is now like a caged animal trying to find her way out of a situation. Except there may be no way out this time, which means she has to get desperate again. Was she stupid enough to bring a gun with her?

It’s been a while since Deacon Sharpe (Sean Kanan) has seen Brooke Logan Forrster (Katherine Kelly Lang), but now he drops by with some news that changes everything for Brooke and the predicament she has been in. Does this mean that Brooke will finally learn how she really got drunk on New Year’s Eve.

Brooke will certainly not take this news lying down. After all, he ruined her marriage and she wants Ridge Forrester (Thorsten Kaye) back. She does not want Deacon and never did. (At least not recently.) Rumor has it Brooke is going to pay a visit for Sheila with Sheila in a position that can’t hurt her every again. Let the fireworks fly for this confrontation that is sure to be ugly and glorious at the same time. Stay tuned to The Bold and the Beautiful weekdays to see how these stories play out.