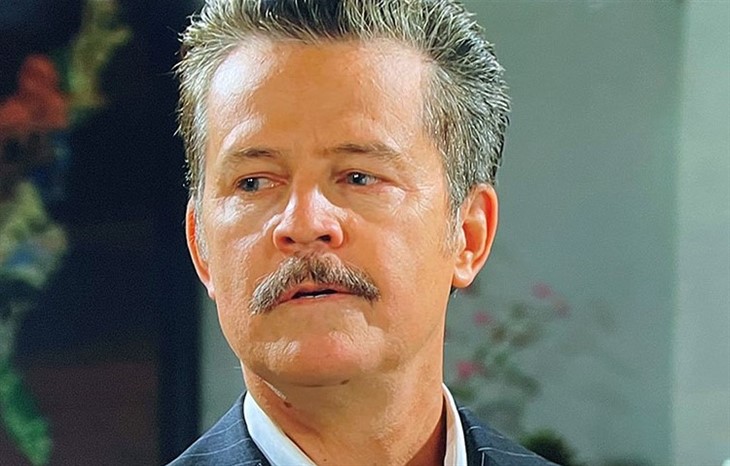 The Bold and the Beautiful spoilers document that Jack Finnegan (Ted King) has been conspicuously missing following John Finn Finnegan’s (Tanner Novlan) shooting. Fans know that is all that happened to Finn after Sheila Carter (Kimberlin Brown) took her first shot on that dark night behind Il Giardino.

Li Finnegan (Naomi Matsuda) was the only person who knew that Sheila did not kill Finn until recently. Sheila’s escape from custody and mystifying identification of where Li and Finn were located led to a seeming tragedy.

Sheila appears to have tailgated Li to her watery grave. But this is daytime. So, Jack’s reemergence offers hope that he will find Finn and hopefully discover that Li survived her recent crash.

King won this year’s Daytime Emmy Award in the Outstanding Guest Performer in A Drama Series category. It was his first-ever Daytime Emmy nomination.

This actor’s first credit came in the 1985 television movie, The Midnight Hour. He went to achieve multiple credits in a variety of television and movie rolls during the next three-plus decades.

Soap opera fans know King’s daytime debut came in 1994, when he portrayed Ron Nettles on Another World. He also portrayed Danny Roberts on Loving and its spinoff, The City, in the mid 1990s, brothers Luis and Lorenzo Alcazar on General Hospital from 2002 through 2007, and Tomas Delgado on One Life To Live in 2011 and 2012. He debuted as Jack on B&B in 2021.

King posted the following comments on his Instagram account following his Emmy win, “A funny thing happened while attending a party on Saturday with my wife Maya King, friends and colleagues.”

B&B Spoilers – Where Has Jack Finnegan Been?

Few mentions were made about Jack in recent months. He was said to have been estranged from his wife.

The above happened after Li was shocked to learn that Jack had an affair with Sheila decades ago. Brown’s character was working as a nurse in the same hospital where Li was a practicing doctor.

However, it felt off that Jack would not be seen or referenced after Finn was shot and believed to have been killed. The first mention of Jack came when Li told Sheila that she was no longer with him.

The Bold And The Beautiful Spoilers – Searching For Li Finnegan

The setup has been established. Li’s fiery plunge into the water creates a mystery, with Jack searching for his missing wife.

Devoted fans know that also puts Jack on the trail of the son Li believed they adopted. He is teased to talk with Taylor Hayes (Krista Allen) and Thomas Forrester (Matthew Atkinson). Plus, Jack will assuredly encounter Sheila along the way.

Y&R Spoilers: Victoria Is Ready To Trick Them All