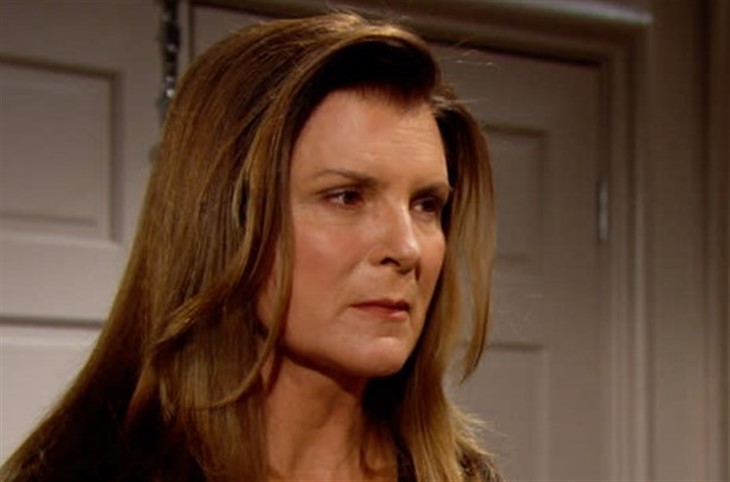 The Bold and the Beautiful (B&B) spoilers for the next two weeks are in. From June 27 to July 8, John “Finn” Finnegan (Tanner Novlan) and Steffy Forrester Finnegan (Jacqueline MacInnes Wood) share a cosmic connection. Quinn Forrester (Rena Sofer) endures comedic chaos to get her man. Plus, Sheila Carter (Kimberlin Brown) gets help with a crisis.

The Bold And The Beautiful Spoilers – Love And Heartache

B&B spoilers for the week of June 27 reveal that Eric Forrester (John McCook) and Donna Logan (Jennifer Gareis) are caught in the act. After learning about Eric’s pickleball lie from a waiter, Quinn and Bridget Forrester (Ashley Jones) burst into the bungalow. That will lead Quinn to be heartbroken as she realizes that both the men in her life are gone.

Even though Eric was busted cheating on Quinn and with a Logan woman, he tries to make things right. Eric will choose to be with Donna but encourages Quinn to stop Carter Walton’s (Lawrence Saint-Victor) wedding.

Quinn will have a comedic journey to stop Carter and Paris Buckingham’s (Diamond White) wedding. This includes the use of a beach cruiser bicycle. Quinn does make her love declaration at the wedding, which shocks Carter. A photo shows Grace Buckingham (Cassandra Creech) consoling Paris, so it looks like Quinn wins Carter in the end.

The Bold And The Beautiful Spoilers – What Else To Expect

The Bold and the Beautiful spoilers reveal that Zende Forrester (Delon de Metz) will be a “prince in waiting.” So, it sounds like Zende might give Paris another chance after Carter breaks her heart.

Over with Sheila, she is now responsible for keeping Finn alive after causing Li Finnegan’s (Naomi Matsuda) death. Eventually, Li’s car and body will be found. However, we can’t rule out the possibility that Li gets saved at the last minute or fakes her death. No matter what Li’s fate is, Sheila will have to find a way to keep Finn alive.

Even though Sheila used to be a nurse, she is out of her league with Finn’s coma. This will have Sheila asking for Mike Guthrie’s (Ken Hanes) help. Even though fans know Finn eventually recovers and gets back to Steffy, it will be a rocky road. Expect Sheila to have to get out the shock paddles, which means Finn flatlines.

During the week of July 4, Steffy will return to the screen as she reflects on her love and life with Finn. It is teased that Steffy and Finn will share a cosmic connection. So, perhaps Steffy won’t be able to shake the feeling that Finn isn’t truly gone.

Speaking of Finn, he will wake up and be in a startled state. It will be interesting how he reacts to Sheila being by his bedside. What will Sheila say when Finn asks for Steffy and Li?

It is also teased that Taylor and Thomas Forrester (Matthew Atkinson) are together when Jack Finnegan (Ted King) demands answers about Li. Will Jack find out that Sheila is responsible for Li’s death?