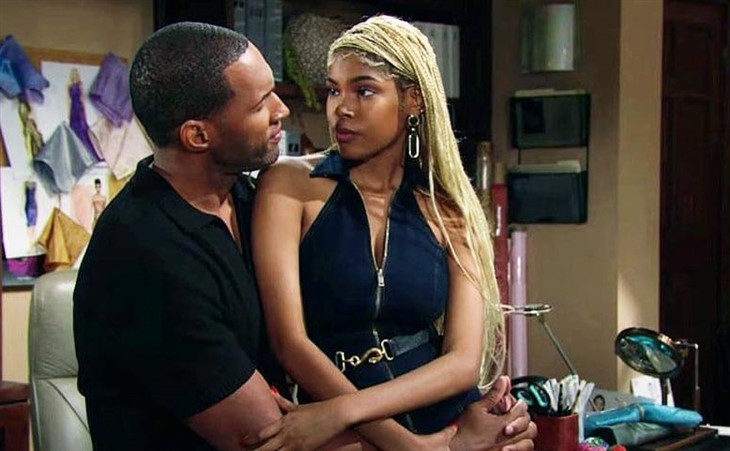 The Bold and the Beautiful (B&B) spoilers for Tuesday, June 21, 2022, reveal Carter being like a typical man on this soap.

If you can’t have the woman you really want on The Bold and the Beautiful, then go for whatever woman you can, right? That’s what Carter Walton (Lawrence Saint-Victor) does after being rejected by Quinn Fuller Forrester (Rena Sofer) yet again. Carter feels he has to be with a woman so if Quinn is turning him down and Paris Buckingham (Diamond White) is begging for his attention, then Paris it is.

He even takes the thing that Quinn just designed, that he placed on her finger begging her one more time to leave Eric, and he places that ring on Paris’ finger. Needless to say, Paris thinks this is the best moment of her life. So what if she knows in her heart that Carter is really in love with Quinn. She will marry this man and make him love her. She knows she can do it.

Carter is likely going to really regret this when Quinn discovers a big secret that Eric Forrester (John McCook) is keeping. He will also likely regret it when he realizes Zoe Buckingham (Kiara Barnes) might have been the better choice between these two sisters.

Li Finnegan (Naomi Matsuda) spent two months trying to keep the fact that John ‘Finn’ Finnegan (Tanner Novlan) is alive by stashing her comatose son in a hotel room hooked up to machines. She should have known Sheila Carter (Kimberlin Brown) would escape jail and find them both. While she was thrilled when Finn seemed to be waking up, Sheila quickly conked her over the head, so Li seemed to have an idea — pretend to want to team up with Sheila and give Finn double the care and double the mothering.

Well, Li underestimates just how insane Sheila really is when Sheila turns on her and Li is forced to escape to try to save her life. The problem is that Sheila goes right after her because she is not quite sure how to take care of Finn by herself. Well, she better bring out those old nursing skills fast because that is exactly what it looks like she is going to have to do. But where will Li end up? Stay tuned to The Bold and the Beautiful weekdays to see how these stories play out.

Days Of Our Lives Spoilers: Abe And Paulina Finally Say ‘I Do’