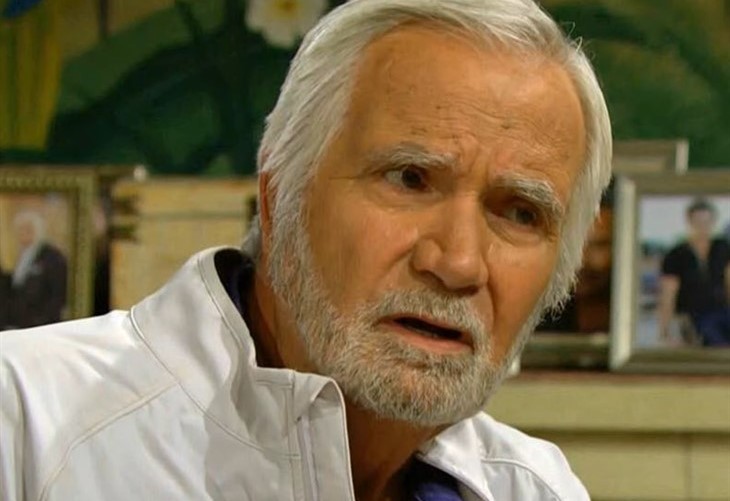 The Bold and The Beautiful (B&B) spoilers and updates tease that Eric Forrester (John McCook) will be busted this week on BOLD!

The Bold And The Beautiful Spoilers – That Wasn’t On The Menu!

Quinn Forrester (Rena Sofer) goes to the club with Bridget Forrester (Ashley Jones) for lunch and as they’re ordering, the waiter (George Gray) mentions the pickleball court is closed! The two women are at the same club where Eric has said he’s been going to play pickleball and the waiter says the court has been closed for some time now. Now Quinn knows Eric has been lying to her and she confronts the waiter, she wants him to tell her where he is; she doesn’t know what to think!

All these many months Eric has told Quinn he is playing pickleball at the club and she’s been worried about his heart racing! The waiter finally spills that Eric has a private bungalow at the club and gives her the location!

Of course, Quinn’s mind can only go to one thing – that Eric is having an affair, and Bridget’s not real happy either; Quinn has been so worried about Eric’s heart racing! Of course the two of them decide to go find the bungalow and check things out, Bridget in an awkward position as his daughter! Bridget will be in an even more awkward position when the two reach Eric’s bungalow and find her father in bed with her Aunt Donna Logan (Jennifer Gareis)! All the time, Quinn fumes to herself thinking about all the trouble she had gotten into when she and Carter Walton (Lawrence Saint-Victor) had an affair! She’d fallen into temptation because Eric had kept pushing her away, and to start with she’d turned to Carter as a friend to lean on!

Quinn hadn’t cared anymore if Eric and she couldn’t have a physical relationship because of his erectile dysfunction; she was fine with just companionship. So she is really livid, and understandably so, suspecting he’s functioning just fine with his mysterious mistress! When she and Bridget reach the bungalow and burst through the door, there he is getting it on with his ex-wife and Bridget’s Aunt Donna in bed!

This is even worse – Eric isn’t having the affair with some mysterious siren who’s lured him to her bed, probably trying to get his money! This is Donna, his ex-wife, and Bridget’s reaction is much the same as Hope Spencer’s (Annika Noelle) was – how dare she, Eric is a married man!

Once Quinn and Eric are alone, she has a serious discussion with her husband, apparently she’s calm enough for Bridget and Donna not to worry she’d kill him! It’s not exactly an apples to apples situation, more like an apples to oranges, because Quinn fell into temptation with Carter because Eric was neglecting her! Eric, on the other hand, appears to be just doing whatever the Sam Hill he wants, and not caring how hard Quinn has been trying to fix “them”! She has to be thinking that his erectile dysfunction was just an excuse all along and he had to be having this thing with Donna all along! Viewers can expect that this discussion will not be calm at all, and quite possibly vicious!

Days Of Our Lives Spoilers: Shawn And Jan Kiss, Is It Romance Or Revenge?