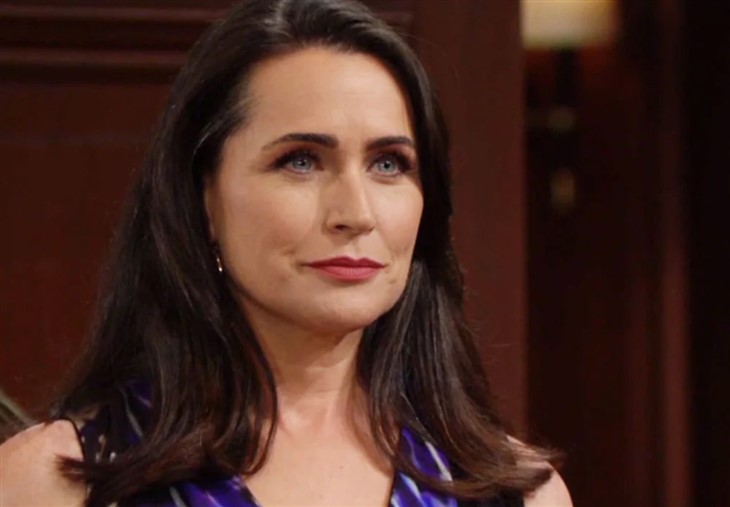 The Bold and the Beautiful spoilers document that Quinn Fuller (Rena Sofer) will discover that her husband’s apparent obsession with playing pickleball was an intentional ruse. Eric Forrester (John McCook) and Donna Logan (Jennifer Gareis) will be having more than a pillow fight at the club.

Making matters even more embarrassing, Bridget Forrester (Ashley Jones) is teased to learn about her father’s dalliance with his former wife. Viewers saw Quinn’s recent inclusion of Bridget as a foreshadowing that has come to pass.

Eric turned away from Quinn in the recent past. He felt sorry for himself, not wanting to share his ED diagnosis with her.

Quinn understandably misinterpreted Eric’s distance as him falling out of love with her. That is when she turned to Carter Walton (Lawrence Saint-Victor), who lent a sympathetic ear to start.

Carter was also in a sensitive head space during that time in the plot. He had not yet gotten past Zoe Buckingham’s (Kiara Barnes) shoddy treatment. She accepted his rushed engagement proposal despite being drawn to Zende Forrester Dominguez (Delon de Metz).

Whatever Quinn and Eric shared still matters. But the reality of now has been shattered.

Eric truly loved Quinn. She was different than any woman he met or will ever know. His staunch defense of her was the ultimate compliment for a woman whose past romantic connections included Wyatt Spencer’s (Darin Brooks) father, Bill Spencer (Don Diamont).

But soaps are about change. So, the us against the world bond that Eric and Quinn shared appears to represent yesterday’s story.

Eric made a series of mistakes. His first, in hiding the ED diagnosis is explainable because of the sensitive nature of what could have been an enduring situation.

Initially endorsing Quinn’s connection with Carter was wrong. That confused Fuller and Saint-Victor’s characters. But setting rules for their marriage after claiming to forgive Quinn and then, cheating on her was simply dishonest.

It is fair to suggest that Eric was most confused about his heart. But he used free will when contacting Donna, using her as well.

Eric tarnished his reputation, which developed into nobility during his senior years when it had not been at that high level in the distant past. Quinn deserves respect because her recent apology was fully sincere, and she stuck to it. She will grasp that truth and likely move beyond Eric soon.

Days Of Our Lives Spoilers: Jan’s Got Plans For Shawn