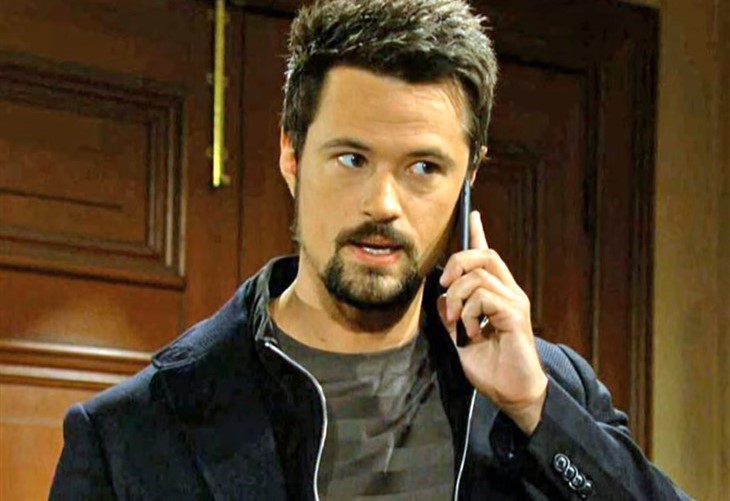 The Bold And The Beautiful Spoilers – Sheila Carter Arrested

Sheila was shocked when Steffy recalled Finn getting shot. Steffy also talked about how Sheila shot her and then left her in the alley to die. As the heated discussion continues, Sheila will eventually be arrested. That is only the beginning of the fallout, though.

During the week of May 16, Steffy, Ridge, and Taylor Hayes (Krista Allen) will still be reeling over the bombshells regarding Sheila. As fans saw in Friday’s episode, Sheila didn’t just admit to shooting Steffy and killing John “Finn” Finnegan (Tanne Novlan). Sheila also confessed to being the one that caused Brooke’s relapse on New Year’s Eve.

When Sheila made the admission regarding Brooke’s relapse, she mentioned Thomas knew about it. So, expect the Forrester family to question Thomas about keeping Sheila’s secret.

The Bold And The Beautiful Spoilers – Thomas Forrester’s Emotional Confession

The Bold and the Beautiful spoilers reveal that Thomas knows he can no longer keep his knowledge about Brooke’s relapse a secret. Thomas has a conversation with Ridge about Sheila.

That is when Thomas gets emotional as he admits finding out about Sheila tricking Brooke into drinking. Of course, Ridge will demand to know why Thomas didn’t speak up. Thomas will have some serious explaining to do. It is stated that Thomas will feel incredibly guilty over not telling the truth.

Ridge goes to tell Brooke that drinking on New Year’s Eve wasn’t her fault. Brooke is horrified to find out that her relapse was set up by Sheila. Ridge’s attitude toward Brooke will soften now that the truth is out. However, when Brooke asks Ridge to come home, he says not yet. Ridge admits that he still needs more time.

It is confirmed that Ridge will move in with Eric Forrester (John McCook). So, it appears that Ridge will leave both Brooke and Taylor hanging about their romantic futures. Which woman will Ridge end up choosing? What does the future hold for Thomas once he admits to keeping Sheila’s secret? We will have to keep watching the CBS soap to find out.