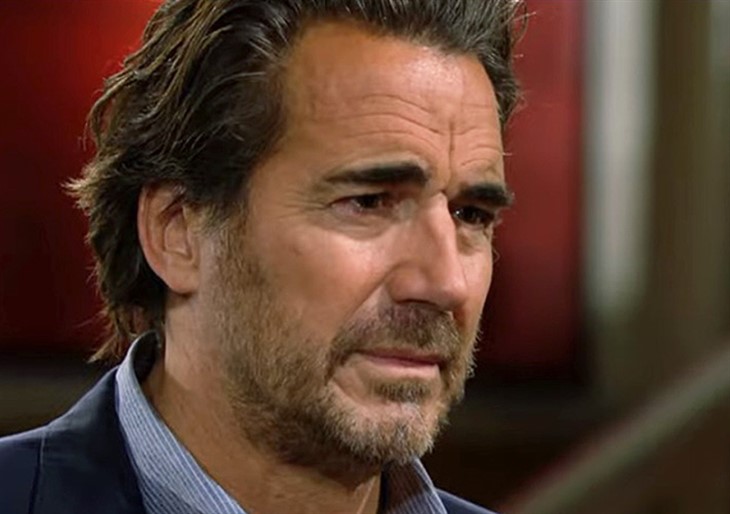 The Bold and the Beautiful (B&B) spoilers document Ridge Forrester’s (Thorsten Kaye) emotions are frazzled. His love for Brooke Logan Forrester (Katherine Kelly Lang) is eternal but will be severely tested by the coming daytime storm.

Viewers know the rub, Deacon Sharpe (Sean Kanan) has created a higher calling wall for himself. He is using his bond with Hope Spencer (Annika Noelle) to try and live a better life. The problem is Deacon’s feelings for his daughter’s mother, the very much married Brooke.

The Bold And The Beautiful Spoilers – Ridge Forrester Fears His Rival

Ridge’s true rival is Bill Spencer (Don Diamont). But that battle has been back-shelved by TPTB to enable this new one to form. It offers a different triangle for Ridge and Brooke to deal with this winter.

Brooke was not with Ridge at the point in B&B history when she became involved with Deacon. Kanan’s character was married to Brooke and Eric Forrester’s (John McCook) daughter, Bridget Forrester (Ashley Jones), when he and Brooke’s connection happened and led to Hope’s birth.

So, Ridge’s feelings about Deacon are steeped in fear. He knows that Brooke has a place in her heart for that man for some unknowable reason.

Deacon knows that Brooke is still drawn to him. That is why her deeper feelings were revealed when her inhibitions were affected by alcohol on New Year’s Eve.

Ridge will soon be made aware of the shots his wife and Deacon shared. He will come to know about the kiss Douglas Forrester (Henry Samiri) witnessed and Deacon’s overnight, though platonic, stay at the mansion.

It is in Brooke’s interest that Deacon remain silent when he is verbally berated by Ridge at Il Giordino. So, he will do so and protect Brooke‘s honor. That should help Deacon at a later point in storyline time.

Taylor Hayes (Krista Allen) is teased to be the one who tells Ridge the gist of what happened between Brooke and Deacon. Ridge will need to confirm that believed fact on his own.

Brooke fears her husband learning all that happened approximately a month ago, which establishes this compelling soapy scenario. Having her rival, Taylor, be the one who becomes involved in the reveal will make matters all the worse on B&B, with Ridge appearing likely to become Brooke’s former husband once again.