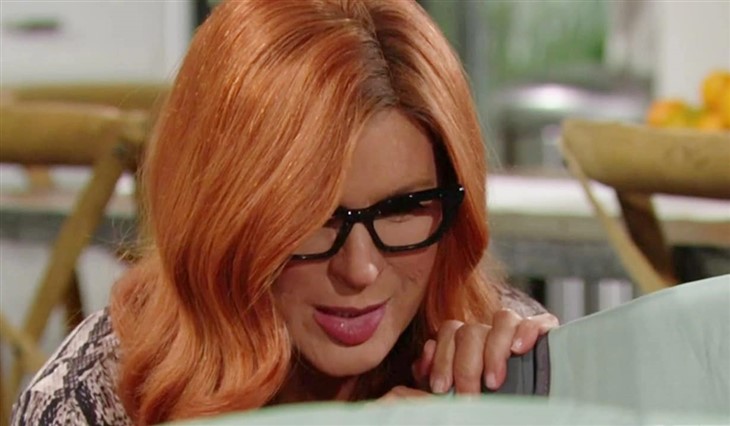 The Bold And The Beautiful spoilers suggest that Sheila Carter (Kimberlin Brown) may get the job as Hayes Finnegan’s (Iliana and Vienna Norris) nanny. Will Sheila’s disguise get her access to John “Finn” Finnegan (Tanner Novlan) and his son? Could “Lina” take off with Hayes once she is in the home?

The Bold And The Beautiful Spoilers – Sheila Carter Is Determined

The Bold and The Beautiful spoilers reveal that Sheila is determined to get close to Finn and Hayes. Deacon Sharpe (Sean Kanan) has warned her time and again to stay away. Deacon is convinced that Sheila will be recognized if she keeps hanging around Finn and will get them both sent back to prison.

Deacon is on parole and has been harboring Sheila for some time. If Sheila is discovered alive it could be disastrous for Deacon in many ways. Hope Spencer (Annika Noelle) could certainly cut ties with her father. Deacon would also lose what ground he has gained with Brooke Logan (Katherine Kelly Lang) as well.

B&B Spoilers – Will Sheila Carter Take Out The Nanny?

Steffy Forrester (Jacqueline MacInnes Wood) doesn’t seem likely to be getting rid of her nanny any time soon. However, it is possible that Sheila could get rid of the nanny for her. Shelia could pay the nanny a huge sum of money to leave town since she says he has money stashed away. Steffy has to be looking for a nanny to hire one. Perhaps Amelia (Nicola Posener) could have to leave town for an emergency as well.

B&B spoilers show Sheila could arrange a permanent solution. Sheila has already proven that she’s not beyond killing to get what she wants. Sheila did shoot her son and her daughter-in-law already. Sheila has threatened Deacon as well. Sheila could get rid of Amelia leaving Steffy in need of a nanny for Hayes and applying for the job as “Lina”. Of course, there is always the chance someone could recognize Sheila, but Finn hasn’t put it together so far. Could Sheila’s plan work?

Steffy knows Sheila but being around Finn could be a huge mistake. Finn spent a lot of time with Sheila while she was taking care of him. Finn knows Sheila’s mannerisms and her actions. Finn knows the look in Sheila’s eyes. Finn could easily recognize Sheila if he spent much time with her. Will Sheila get caught because she wants to be close to her son?

Finn should not hesitate to turn Sheila in if he discovers her because he knows she is a danger to his family. However, Finn may be swayed by Sheila’s need for family. Finn has expressed his gratitude for Sheila giving birth to him. Does Finn have a soft spot for Sheila even after she tried to kill both him and Steffy? Will Sheila get way too close to Hayes for anyone’s comfort?

DOOL Spoilers: Life After Abigail, What’s Next For Chad?