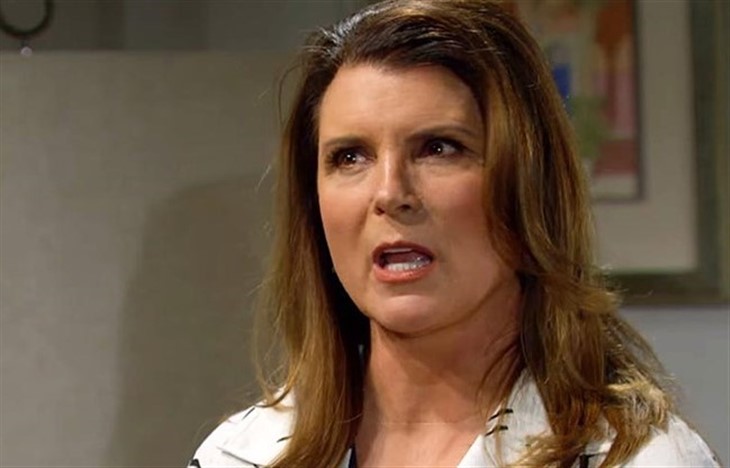 The Bold and the Beautiful (B&B) spoilers for Thursday, August 18, 2022, reveal Deacon Sharpe with a new/old friend.

The Bold And The Beautiful Spoilers – Of Course, It’s Sheila Carter, Right?

The last time we saw Sheila Carter (Kimberlin Brown), she was trying to convince Deacon Sharpe (Sean Kanan) to save her and hide her. Then, we heard she was mauled by a bear and was dead. That didn’t actually seem believable, but a spare finger convince the Forresters that they were indeed free of the woman.

Now, Deacon is about to wake up with a friend in his bed and that friend will seem awfully familiar. Odds are, this friend is Sheila and he’s been hiding her this whole time, jeopardizing his freedom and his relationship with Hope Logan Spencer (Annika Noelle) for this crazy woman.

But this is Deacon’s thing — crazy woman in distress. He helped Quinn Fuller (Rena Sofer) during her crazy days and is even the one who helped Diane Jenkins fake her death over on The Young and the Restless. Deacon seems to have a weakness for these types of women.

B&B Spoilers – Ridge Forrester Has To Hear Some Truths

A guilty Ridge Forrester (Thorsten Kaye) confessed the truth to Brooke Logan Forrester (Katherine Kelly Lang) — he kissed Taylor Hayes (Krista Allen) while they were in Monte Carlo. Now, he is back with Taylor and Steffy Forrester (Jacqueline MacInnes Wood) feeling even more guilt for hurting his Logan this way. However, Steffy and Taylor have a few things to say about that one.

The two women present Ridge with a laundry list of things Brooke has done to him through the decades to hurt him. Even in this current marriage, she has kissed Dollar Bill Spencer (Don Diamont) and Deacon. And she lied about both times and went to great lengths to hide stuff. Yes, Ridge kissed Shauna Fulton (Denise Richards) and thought he married her, but none of that turned out to be true. Plus, there are those other marriages that didn’t work out well.

Will Ridge listen to what his daughter and ex-wife have to say about his current wife? Is it time for Tridge for a while rather than Bridge? Steffy sure hopes so — and so does Taylor… Stay tuned to The Bold and the Beautiful weekdays to see how these stories play out.