B&B Spoilers: Is Brooke Ready To Face Her Demons? 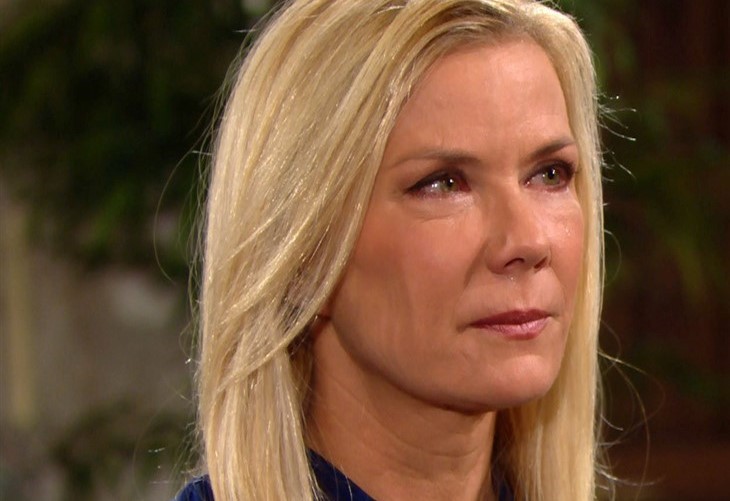 The Bold and the Beautiful (B&B) spoilers for Friday, January 7, 2022, reveal Brooke having to face her demons in a big way, but will it be enough to stop the slow-motion train wreck that is her life?

Brooke Logan Forrester (Katherine Kelly Lang) took a big step when she told Ridge Forrester (Thorsten Kaye) that she fell off the wagon and got drunk on New Year’s Eve when he was out of town. She doesn’t even know what made her do it since she blacked out. Of course, she doesn’t know Sheila Carter (Kimberlin Brown) made her do it by switching her non-alcoholic champagne with the real deal. She also doesn’t bother telling Ridge that she ended up kissing Deacon Sharpe (Sean Kanan) and waking up with him in her bed, although nothing more than a kiss happened between them.

Since Ridge doesn’t know the whole truth, he just wants to be a support for Brooke now as she tries to not take a drink. Since she has been in anguish since Monday, she can’t help but stare at the bottle, but she knows if she drinks more, trouble just awaits and she has enough troubles right now. Considering how Sheila is gunning for her, she doesn’t even know half of it.

B&B Spoilers  – Hope Logan Is Also There For Her Mother

Although Hope Logan Spencer (Annika Noelle) doesn’t understand why her mother wants to shut off all relations with Deacon again after they were getting along so well, she is shocked to learn Brooke had been drinking. Like Ridge, Hope wants to also be a support for her mother and thinks the Deacon conversation can wait for later.

Between Ridge’s support and Hope’s support, Brooke makes the decision to go to an AA meeting for the first time in a long time. What will she discover about herself there and will she remember how she really got drunk on New Year’s Eve — before she goes and blames the wrong person for her problems, with that wrong person being Deacon? It looks like that’s exactly what Sheila wants. Stay tuned to The Bold and the Beautiful weekdays to see how this story plays out.

Days Of Our Lives Spoilers: JoDevil Stuns Salem With His Latest Stunt