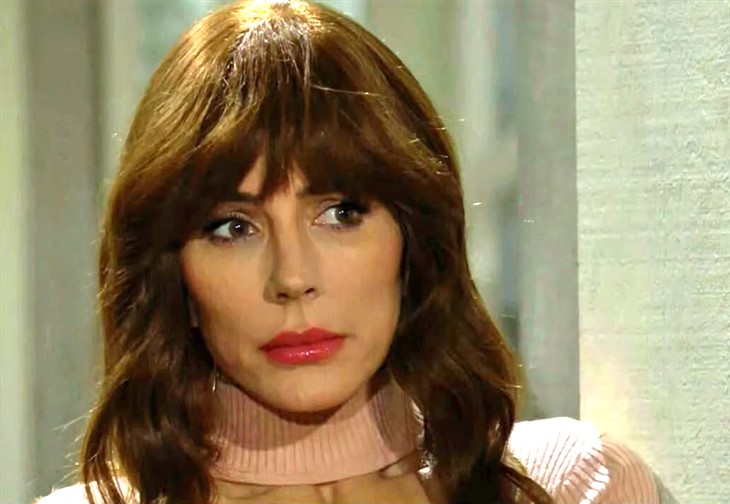 The Bold and the Beautiful spoilers document Taylor Hayes’ (Krista Allen) vocation and training allow her to read people. That, combined with her intention of keeping an eye on Sheila Carter (Kimberlin Brown), means she should be able to determine how Brooke Logan Forrester (Katherine Kelly Lang) fell off the wagon.

Assuming that Taylor learns this information also means that she will have a choice to make. Allow Sheila’s plan to destroy Brooke to play out or inform her long-time rival for Ridge Forrester (Thorsten Kaye) of the truth. But what would Taylor’s incentive be to help Brooke?

Sheila says that she has changed. Yeah, right.

As viewers have seen, Sheila can keep herself composed in certain situations and when a goal is in mind. That happened when Steffy Forrester Finnegan (Jacqueline MacInnes Wood) slapped Sheila across the face, which elicited no response.

The contrast between Sheila not attacking Steffy and retaliating against Brooke is gigantic. No one knew the cruel actions Sheila took when she switched labels on the champagne bottles. But that action has to be revealed.

The Bold and the Beautiful updates and spoilers show Ridge had to leave town on short notice just before New Year’s Eve. However, he set his itinerary so that a return could take place hours before midnight.

Sheila’s deviousness resulted in an Il Giordino delivery guy handing Brooke alcohol that was disguised as non-alcoholic because of the label Sheila applied. It also just so happened that Deacon Sharpe (Sean Kanan) was invited to Brooke’s house, and her other guests, Hope Spencer (Annika Noelle), Liam Spencer (Scott Clifton), and their children, opted to leave the party early.

The above sequence allowed Brooke to be alone with Deacon until he left. But he forgot his cell phone, returned, drank with Brooke, and then kissed her while Douglas Forrester (Henry Samiri) watched from the side entrance. Samiri’s character is sure to tell one or both of his parents what he witnessed.

The Bold And The Beautiful Spoilers – Taylor Hayes Detects The Truth

B&B has various options to enable a reveal. Sheila could tell Deacon, who then tells Brooke.

Alternatively, the information could make its way to Taylor as an information gift from Sheila. Brown’s character would likely see that conversation as a way of letting Taylor know she backs her efforts to split Brooke from Ridge. How Taylor handles the charged news in that projected scenario would propel the next part of this tale.

This site is a leading source for everything linked to The Bold and the Beautiful. Check back regularly forB&B spoilers and news!

The Bold And The Beautiful: Matthew Atkinson Gets Personal