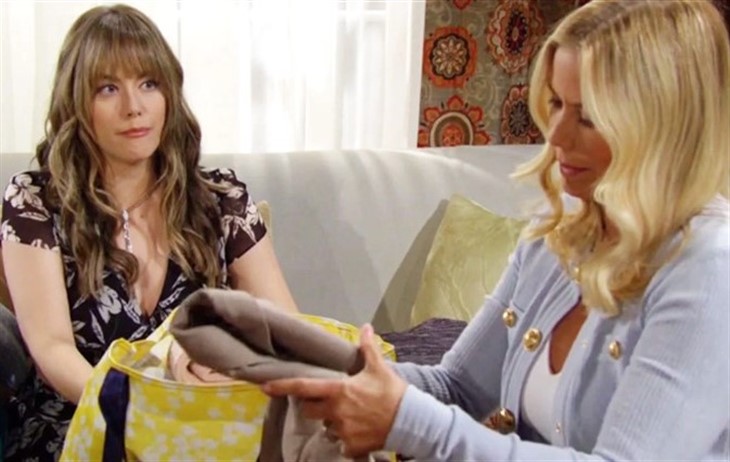 The Bold and the Beautiful (B&B) spoilers for Friday, January 21, 2022, reveal Hope wondering if Douglas is the ultimate truth-teller. Perhaps she should listen to her son because he’s certainly been right before.

The Bold And The Beautiful Spoilers – Sheila Is WAY Too Obvious

Beth is Phoebe and Phoebe is Beth. Liam Spencer (Scott Clifton) should know exactly what that means and how Douglas (Henry Joseph Samiti) cannot tell a lie. In fact, he enjoys telling the truth, especially when he knows he shouldn’t. So, when Douglas announces to Hope (Annika Noelle) and Liam that he saw Grandma kissing Santa Claus on New Year’s Eve, they sit up and take notice.

How could that be? Ridge Forrester (Thorsten Kaye) was away on New Year’s Eve so who could Brooke (Katherine Kelly Lang) have been kissing? And why would Santa be visiting a week after Christmas? Knowing that Brooke was drinking that night, Hope really, really wants to know what is really going on, so she demands that Brooke tell her.

Brooke does her best to dodge Hope’s questions, but it becomes too much for her and she tells Hope that yes, she was kissing Santa, but it was really just Deacon Sharpe (Sean Kanan) wearing a Santa hat. Does it hit Hope that maybe that’s why Brooke announced she wanted Deacon out of their lives?

While Brooke is trying to keep her New Year’s Eve secret a secret now that she knows what Douglas saw, Ridge is over at Steffy Forrester’s (Jacqueline MacInnes Wood) spending time with his ex-wife and Steffy couldn’t be more thrilled to see her parents together.

Taylor Hayes (Krista Allen) and Ridge reminisce about old times as Steffy stares on in glee. After Ridge leaves, she urges her mother to once again fight for what she wants. If she wants Ridge, she needs to throw caution to the wind and go for it. Who needs that pesky interloper Brooke anymore? Steffy knows something is going on with Brooke and it can be the thing that gets her parents back together where she just knows they belong. Stay tuned to The Bold and the Beautiful weekdays to see how these stories play out.