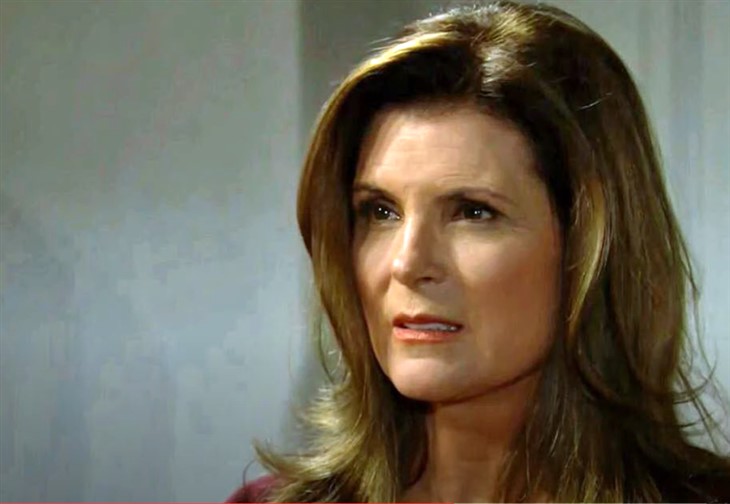 The Bold and the Beautiful (B&B) spoilers reveal that Taylor Hayes (Krista Allen) is the person who made Sheila Carter’s (Kimberlin Brown) Christmas dream come true. Taylor didn’t exactly do this out of the kindness of her heart, but Sheila is grateful. After Brooke Logan Forrester (Katherine Kelly Lang) threatens Sheila, the villain tries to kill two birds with one stone.

The Bold And The Beautiful Spoilers – Sheila Carter’s Gratitude

B&B spoilers reveal that Sheila was infuriated that Deacon Sharpe (Sean Kanan) was going to be able to spend Christmas with Hope Logan Spencer (Annika Noelle). Even though it was just for a little bit, Sheila wanted that same thing with John “Finn” Finnegan (Tanner Novlan). Sheila decided to take matters into her own hands but was immediately shut down.

When Finn and Steffy Forrester Finnegan (Jacqueline MacInnes Wood) called Sheila back to invite her over for Christmas Eve, she was stunned. Then, Sheila found out that it was Taylor who encouraged it. Sheila is beyond grateful for Taylor’s help despite their volatile history.

After Sheila leaves Finn and Steffy’s house, she is overwhelmed with gratitude and joy. Sheila actually got to hold Finn and Steffy’s baby, Hayes Forrester Finnegan. Sheila believes that her luck is finally changing.

Then, Brooke runs into Sheila and probably learns about the Christmas Eve visit with Finn and Steffy’s family. Brooke will be horrified and makes a threat to Sheila. Of course, Sheila doesn’t react well to being threatened, especially when it concerns her family.

The Bold And The Beautiful Spoilers – Multi-Purpose Revenge

The Bold and the Beautiful spoilers reveal that Sheila plots to make Brooke pay. This isn’t just for herself, though. Sheila is still grateful to Taylor and knows if she eliminates Brooke, it will solve both of their problems. Actress Kimberlin Brown explained Sheila’s perspective to Soap Opera Digest.

“Whenever somebody tries to help her the way that Taylor has, Sheila is going to try and return the favor, even if it’s not something that somebody wants. Brooke has sworn that they will make sure she never gets to see her grandson, and the threats that Brooke makes against Sheila, she does not take lightly. Brooke is coming between Sheila and her family…”

Sheila does put a plan in motion, which involves Brooke getting alcoholic champagne instead of the non-alcoholic bottle that she ordered. Brooke gets tipsy and runs into Deacon. The two of them end up partying on New Year’s Eve when Ridge is out of town. The next morning, Brooke has to decide whether to tell Ridge the truth or not. Eventually, Brooke admits she relapsed and got drunk on New Year’s Eve.

However, it sounds as if she omits the part about Deacon being there because Ridge continues to stand by his wife’s side. So, Sheila’s plan is only partially successful. The only problem is Deacon will be the one who pays the price if the truth ever comes out. So, does Ridge eventually free himself of Brooke or not? That remains to be seen, so stay tuned to find out!