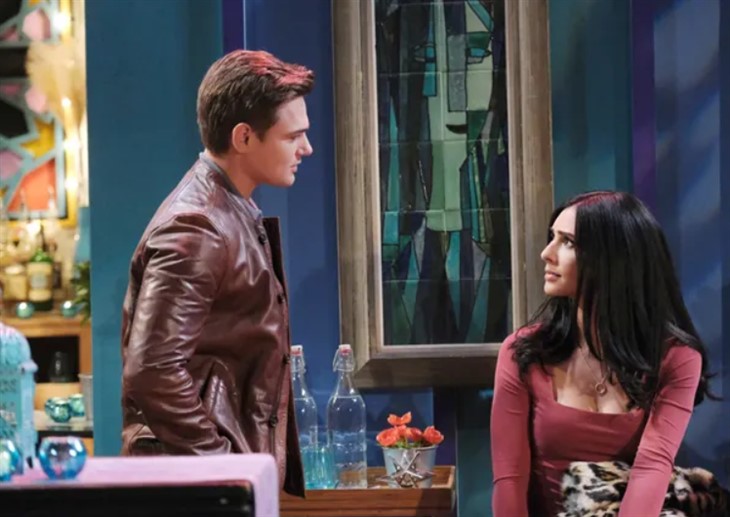 Days of Our Lives (DOOL) spoilers for Friday, January 21, 2022, reveal all DiMeras still not finding Johnny’s behavior to be strange as…heck.

Nobody in Johnny DiMera’s (Carson Boatman) family has so much as questioned his odd behavior since he married Chanel Dupree (Raven Bowens)in Europe and then announced he had no interest in her and was divorcing her just days later. His choice in fashion also hasn’t caused too many questions, not even from the DiMera fashion queen herself, and we are not talking Anna (Leann Hunley), because Anna DiMera Designs is so 1980s. (Where is Calliope Jones anyway?)

It’s the 21st century now and instead, we have Gabi Chic, and Gabi Hernandez (Camila Banus) likes what she sees in her nephew by marriage. When JoDevil starts to come onto her, she’s not sure what to think, but she does like it. She can’t help but respond to his kisses, but what will Jake DiMera (Brandon Barash) say about all this? Gabi better watch her step because she really has no clue who she is dealing with.

DOOL Spoilers – Chanel Price Has A Confession To Make

As JoDevil continues life without her, Chanel has to tell someone what happened the night Johnny dumped her, so she tells her mother all about what happened with Allie Horton (Lindsay Arnold).

Paulina Price (Jackee Harry) already knows what happened because she walked in on the two young women in bed together but then quietly walked away to allow them their privacy. Will Paulina tell Chanel that she already knows all about her and Allie or will she keep it a secret?

Days Of Our Lives Spoilers – Craig Wesley Arrives In Salem

Now that Nancy Welsey (Patrika Darbo) is back in Salem claiming Craig (Kevin Spirtas) cheated on her and wanting to move in with Chloe Lane (Nadia Bjorlin), Craig finally makes an appearance to defend himself.

Did he really cheat on Nancy, something that seems unheard of since they have been together since their teens? Or is there something much more fascinating going on with these two much-missed characters we hope are back in Salem for good? What about their daughter, Joy? Stay tuned to Days of Our Lives weekdays to see how these stories play out.