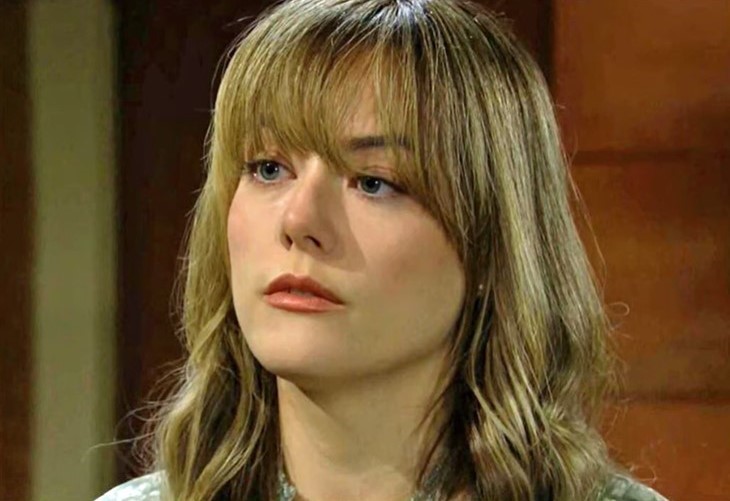 The Bold and the Beautiful spoilers for the week of January 17 reveal that Brooke Logan Forrester (Katherine Kelly Lang) will be backed into a corner. Hope Logan Spencer (Annika Noelle) suspects what really happened on New Year’s Eve. Desperate to get to the truth, Hope begs her mother to confess. Will Brooke tell the truth and will Hope keep her secret?

The Bold And The Beautiful Spoilers – Brooke Logan Forrester’s Plea

B&B spoilers reveal that Brooke was horrified to wake up on New Year’s Day. Deacon Sharpe (Sean Kanan) received a kiss the night before, then Brooke passed out. Deacon carried Brooke up to bed, but instead of leaving, he lay on the bed with her.

Brooke managed to clean up the evidence of alcohol before Ridge Forrester (Thorsten Kaye) got home. Then, Brooke begged Deacon not to tell anyone as she didn’t want to lose her marriage.

Brooke told Ridge and Hope that she drank on New Year’s Eve. However, she left the part about Deacon out of her confession. Brooke has been struggling with her secret ever since. Under normal circumstances, Brooke would have been able to fully confess at her AA meeting. However, she couldn’t because Ridge decided to tag along.

If she had gone alone, she would have gotten everything off her chest and would have been advised to tell Ridge the truth. After all, secrets only get worse the longer they are kept. Plus, secrets have a tendency to sabotage one’s sobriety.

The Bold And The Beautiful Spoilers – Hope Logan Spencer’s Suspicion

The Bold and the Beautiful spoilers reveal that Hope is playing the blame game. First, she blamed herself for Brooke’s relapse. Hope believed that the stress of Deacon resurfacing caused Brooke to drink. Then, she warned Taylor Hayes (Krista Allen) and Steffy Forrester Finnegan (Jacqueline MacInnes Wood) to not interfere with “Bridge.”

Next, Hope realizes that there is something Brooke isn’t telling her. Hope suspects something happened with Deacon and tries to get her mother to confess.

Even though Brooke doesn’t want to admit the truth, she also won’t be able to stand seeing Hope so emotional. Ever since Brooke admitted to relapsing, Deacon has disappeared from Hope’s life. During the week of January 17, Hope will beg Brooke to tell her the truth. Hope explains to her mother that there must be something that she’s not saying.

It sounds like Brooke will be backed into a corner. However, what will Hope do with the confession? Will she agree to keep Brooke’s secret, or could she feel compelled to tell Ridge?