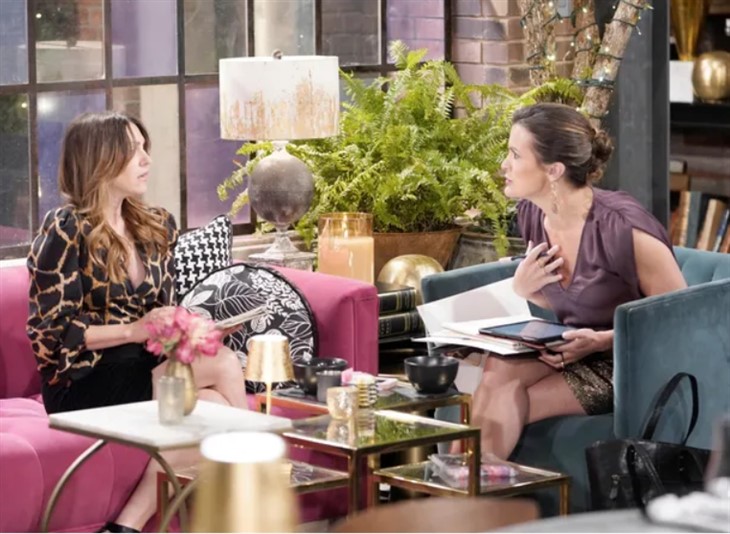 The Young and the Restless (Y&R) spoilers reveal that Chelsea Lawson (Melissa Claire Egan) and Chloe Mitchell (Elizabeth Hendrickson) thought they had the perfect business partnership. However, the duo seems doomed. Chelsea could bail on Chloe when she takes the Marchetti offer. Could Sally Spectra (Courtney Hope) seize an opportunity for the COO position?

The Young And The Restless Spoilers – Summer Newman-Abbott’s Offer

Y&R spoilers reveal that Summer is making big plans for the new Marchetti. Although Jabot hasn’t acquired Marchetti yet, it’s in the words. Plus, Summer’s old boss is completely on board, especially due to Marchetti’s troubled finances. One factor that Summer has to deal with is recruiting talented designers.

Summer already hinted at this to Chelsea as the two bonded over hating Sally. Chelsea was dazzled with the compliments from Summer. Fans already watched as Chelsea and Chloe got into an argument. Even though they were fine afterward, it is teased that the business partners and BFFs will get into another explosive fight.

As Chelsea and Chloe continue to get into more arguments, the business partnership could completely fall apart. After all, Chloe doesn’t seem to understand how Chelsea best uses her creativity. Plus, Summer seemed really interested in bringing Chelsea on board once the Jabot/Marchetti deal goes through.

Marchetti might be in financial trouble and be going through a shakeup, but Summer plans on making it a success in Genoa City. Plus, Marchetti is a big fashion design name to work for. So, Chelsea might decide that it’s the best move for her career.

Of course, this might not sit well with Chloe. When Chelsea was completely off the rails before, Chloe went above and beyond to help her friend.

So, Chloe might feel that she did Chelsea a favor by arranging for them to partner up after Victoria Newman (Amelia Heinle) scrapped the fashion branch of Newman Media. Recent episodes suggest that Chelsea is starting to view Chloe more as her babysitter rather than a business partner.

The Young And The Restless Spoilers – Sally Spectra’s Opportunity

The Young and the Restless spoilers reveal that Sally will seize an opportunity. This seems to go with Sally recently talking to Adam Newman (Mark Grossman) about a new COO. After all, Sally can follow Adam to Newman Enterprises unless there is someone to take her place as COO of Newman Media.

Chelsea and Chloe’s blow-up and partnership end could give Sally an intriguing opportunity. Could Sally offer Chloe the COO job?

If Chelsea abandons Chloe to work at Marchetti, Sally could swoop in and do damage control. Sally was always thankful for Chloe giving her a chance after things blew up with Lauren Fenmore Baldwin (Tracey E. Bregman). The two worked really well together until Chelsea came back to Genoa City.

So, Chloe could realize that despite everything she’s done for Chelsea, she made the wrong choice. Chloe might feel that Chelsea should have been loyal instead of dumping her for a better opportunity the first chance she got.

If Sally offers Chloe the COO position at Newman Media, it could be the perfect new career move. Of course, this might also cause some battles with Chelsea. It sounds like the drama is just getting started!