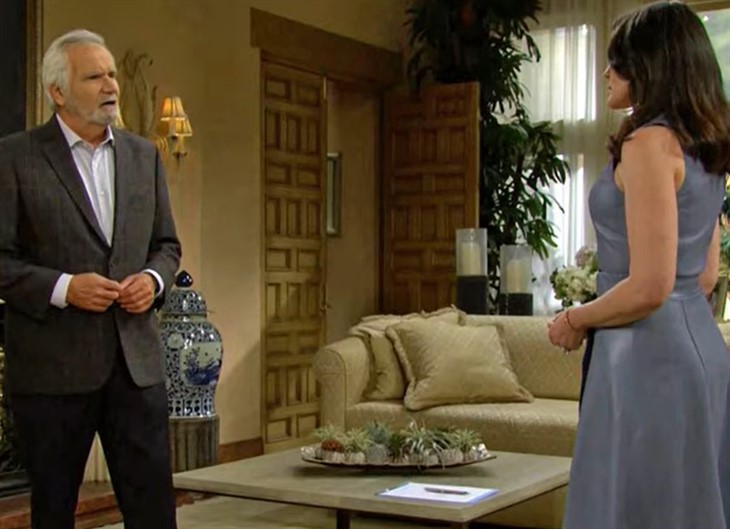 The Bold And The Beautiful (B&B) spoilers suggest that Quinn Forrester (Rena Sofer) will catch her husband Eric Forrester (John McCook) in bed with Donna Logan (Jennifer Gareis). Eric’s affair will finally be exposed. Where will Quinn go from here?

The Bold And Beautiful Quinn has been secretly monitoring Eric’s health for some time. However, after noticing a pattern, Quinn will follow Eric to the club to see what is causing these drastic changes in his heart rate. However, nothing will prepare Quinn for what she is about to see. Quinn is likely to go into the room expecting to surprise her husband but Quinn is the one who will be shocked. Quinn is likely to walk in and catch Eric and Donna making love. How will Quinn handle finding what she thought was her loyal husband in bed with another woman?
The Bold And The Beautiful – Quinn Forrester Banned Donna Logan

The Bold And The Beautiful’s Quinn forced Eric to ban Donna from Forrester Creations as well as his life after she learned of Eric’s sexual response to Donna. Quinn also threatened Donna if she caught her near Eric again. Quinn’s confrontation could very easily push Eric into a heart attack, especially if Quinn attacks Donna. Furthermore, it seems that this will force a confrontation that could end in some harsh revelations. Will Eric realize he should have simply divorced Quinn in the first place? Will Quinn cause a scene that gets media attention at the club?

B&B Spoilers – Quinn Forrester Can Be With Carter Walton

The Bold And The Beautiful’s Quinn will come to the realization that now she is freed to be with Carter Walton (Lawrence Saint-Victor). However, it may be too late since Carter plans to marry Paris Buckingham (Diamond White). Things could get pretty sticky in this situation. Once Carter has proposed, it may not be as easy to get out of an engagement as he thinks. Carter has already broken Zoe Buckingham’s (ex Kaira Barnes) heart and Grace Buckingham (Cassandra Creech) won’t let that happen to a second daughter. Will Carter be forced to honor his commitment or pay the price? Will Carter choose to stay with Paris because Quinn previously turned him down?

Quinn’s marriage may be over but that doesn’t guarantee she will be happy with Carter. Will Carter abandon Paris to be with Quinn? Will Quinn discover Eric’s affair too late to stop Carter’s marriage?