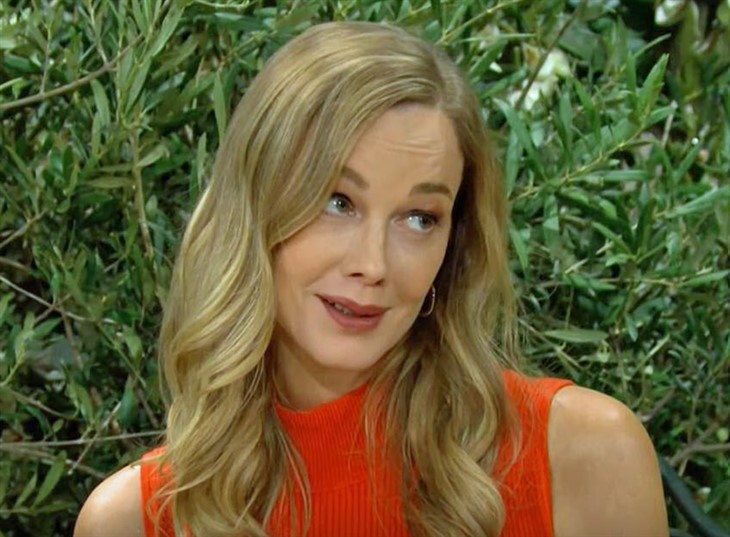 The Bold and the Beautiful (B&B) spoilers for Tuesday, June 28, 2022, reveal Quinn and Bridge seeing something neither of them ever wanted or needed to see.

Quinn Fuller Forrester (Rena Sofer) has been trying to pretend everything is right with her marriage although she still doesn’t have the sexual relationship she wants with her husband. She blames herself because of her affair with Carter Walton (Lawrence Saint-Victor), but now she is going to find out the real truth.

That’s right, Quinn walks right in on Eric Forrester (John McCook) in bed with Donna Logan (Jennifer Gareis) and finally knows why her husband’s heart rate was so high every time he played pickleball. He wasn’t playing pickleball at all. Instead, he has been having a clandestine affair with his ex-wife, and now his daughter, Bridge Forrester (Ashley Jones), gets to see it cause she is with Quinn. That is never something a daughter wants to see her father do, especially with her aunt.

Yes, Quinn is going to get the shock of her life but is also going to realize she is about to allow the real love of her life to get away and she needs to hurry and do something.

Meanwhile, Dumb Carter thinks he is doing Eric and Quinn a favor by marrying Paris Buckingham (Diamond White). He wants to be with someone, so Paris will do. But, he also does not want Paris to ever tell Eric that he still has feelings for Quinn because he doesn’t want to hurt Eric again. That is never a good reason to get married, but don’t tell Carter that.

So, Paris got a quickie gown which we guess was available because she works for Forrester Creations. And their favorite Italian restaurant gave them some space to have a quickie wedding to go with that quickie gown. Since Carter usually officiates all ceremonies on this show, they must have found themselves a quickie officiant too. Maybe Ridge Forrester (Thorsten Kaye) gets quickly ordained.

Now, will Quinn be quick as she races to stop this wedding in a way only Quinn can do? Paris better hope she isn’t if she wants to keep this man who doesn’t actually love her. Stay tuned to The Bold and the Beautiful weekdays to see how these stories play out.